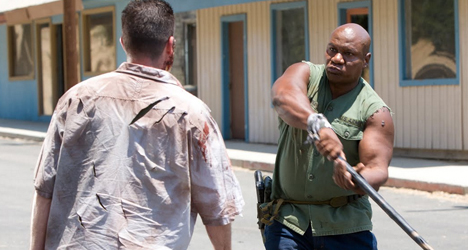 The film, which debuted October 29, 2011, as part of Syfy Network’s Saturday Original Movies, garnered the most watched Saturday Original movie of the year among adults 18-49 and 25-54, with 2.1 million total viewers. Zombie Apocalypse will be available on DVD for $14.95 SRP and Blu-Ray for $24.95 SRP.

Ramona (Taryn Manning), Billy (Eddie Steeples) and Kevin (Gerald Webb) have just come down from a hideaway in the mountains months after a zombie apocalypse. They are immediately beset by a dozen zombies and rescued by Mack, Cassie, Hammer, and Julian who are on their way to Catalina Island, the last refuge of humanity. They take the newcomers under their wing as they hunt for supplies, kill massive amounts of zombies, and try to survive.

Director by Nick Lyon from a screenplay by Brooks Peck and Craig Engler, Zombie Apocalypse was produced by David Michael Latt, Paul Bales, and David Rimawi.