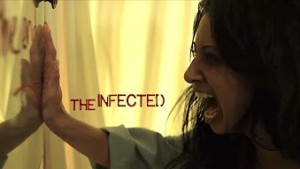 Chainsaw to the Leg, LLC 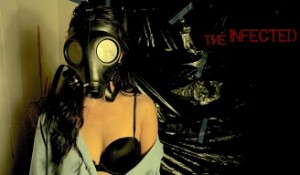 The plot of The Infected is as follows:

“Four friends meet to celebrate their college graduation when a dirty bomb containing a highly contagious and lethal virus explodes in Los Angeles. Quarantined together in a tiny apartment they pass the time with drugs, sex, and alcohol. As the effects of the virus begin to set in, a sickness invades their bodies, and they all turn on one another in a battle to survive. Little do they know, the plague outside the front door is nowhere near as strong as the illness they’ve created inside.” 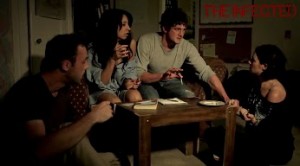 While The Infected fits squarely in the horror genre, it has one important difference. The lead character is a visible minority. As Morgan states: “We never even thought about the fact that Helenna is a visible minority. It was only after we wrapped and started discussing our plans for the project that we realized how much of an anomaly it is to have a lead actress who isn’t Caucasian in a North American made horror film.”

Santos added: “The entertainment industry has a long way to go in properly representing our cultural landscape. It’s really shocking to me that in the horror genre we could only think of a handful of women who play the lead role and are visible minorities. I’m Filipino/Russian/German and often get shoved into the ‘other’ category when it comes to casting. I was very excited about producing and acting in this project from the beginning, but even more so now that we are able to shed light on the fact that visible minorities can be more than just a stereotype or a supporting character.” 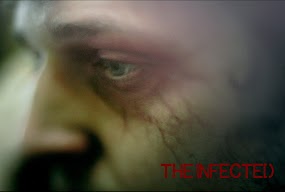 The Infected also stars Jerod Meagher (ABCs of Death 2, Guys Reading Poems), Austin Hillebrecht (Grimm, Arcana) and Melissa Katzin (The Forgotten), and is now in development as a feature film based on the short.

Further information about Helenna and Barry:

Helenna Santos is known for her work in a number of high profile projects including Universal’s American Reunion, USA Network’s The Dead Zone, and the digital series Black Box TV. She is the founder of Ms. In The Biz, a blog-style magazine written by and for women in entertainment. As a producer, in addition to The Infected, Helenna is in development for 2 short films and a feature film all to be produced alongside Barry Morgan. She is also the lead actress and a producer on the digital series Henchmen. Official site: www.helennasantoslevy.com 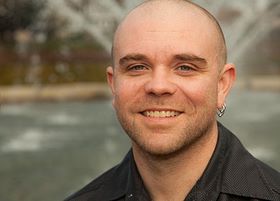 Barry Morgan is a writer, producer and director, as well as a columnist for Maxitmagazine.com and creator of the podcast 1313 Blood Lane. 1313 Blood Lane has guests from current films and classic films from the 70s, 80s, and 90s.   He has received producing and directing awards for the web series Arcana and has interviewed some of the biggest names in the horror genre.