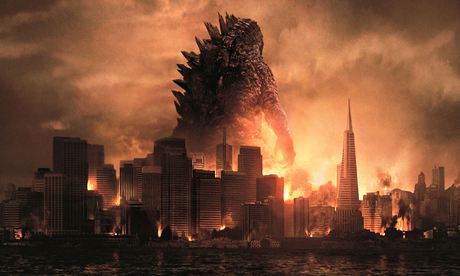 Godzilla’s back … another city gets trashed in an overfamiliar blockbuster. Photograph: Allstar/Warner Bros/Sportsphoto Ltd

At least they get the monster right. Towering over America’s pacific coast, Godzilla looks the real deal. His body-type is pear; small head, big bottom, ginormous paws. His back is covered in spines that in profile resemble a stage of the Tour de France. His tail smashes readily through internationally recognisable tourist locations. His roar is louder than Barbra Streisand. Most importantly, you can identify with the dude; his baleful eyes, his thankless role as nature’s last line of defence.

Sadly for this film, the two-miles-tall lizard is the only sympathetic character in it. The latest update on the Japanese cinematic behemoth that last came to America in 1998 as a light stomp romp starring Matthew Broderick, this earnest reboot has been sweatily anticipated in some quarters. It’s directed by Gareth Edwards, the 38-year-old Brit whose previous film, Monsters, identified him as an aficionado of the genre and a special-effects whiz to boot. That film was handmade on a budget of $500,000; this one cost an estimated $160m and was ordered by Warner Brothers. The result is a clash between massive, lovingly recreated reptiles and the appetites of a corporate vampire squid. The squid wins.

So while many people might want to go to the cinema to see Godzilla, what they get instead is a load of homosapiens desperately trying to put a human face on the drama. They don’t really succeed. A line of actual acting talent – from Bryan Cranston to Sally Hawkins, Juliette Binoche and Ken Watanabe – is reduced to a series of B-movie tropes, from crazed eccentric to rumpled scientist. Aaron Taylor-Johnson plays the hero Ford Brody, yet another all-American beefcake whose only discernible character trait is his ability to talk gently to children. The kids themselves, no doubt intended as a point of identification for a young audience, are really just a procession of glass-eyed, floppy-haired bores.

Link to video: Godzilla: watch Bryan Cranston in the trailer for the new remake of the monster movie The story has been told so many times that you can call it with your eyes closed. America is living happily, America is in peril, America confidently thinks it can solve its problem with guns, America can’t, America panics, America is saved by a single bloke. America has now been under existential threat so many times, and from so many adversaries, that you wonder why anyone even bothers trying to assemble a military response any more. Just ask that plucky individual to do it by himself, it tends to work.

As well as draining the film of any true suspense, the dramatic premise of Godzilla is delivered entirely po-faced. There’s some kind of subtext about the abuse of nuclear power, perhaps an environmentalist thread too. It’s all a bit muddled. But whatever the message is, it’s delivered at the expense of humour. Even Cranston, who in his role as eccentric whistleblower is channeling the spirit of Malcolm in the Middle, gets just one joke to deliver. “I don’t get many visitors,” he says when Taylor-Johnson pays a visit to his conspiracy pit. Even that comes over as sad.

Predictable and two-dimensional, Godzilla is still not without moments of beauty. Alexandre Desplat’s score is restrained and evocative with hints of kaiji movies past. Not only is the titular beast sympathetic, he has a sense of style, emerging elegantly through clouds of smoke to take out another adversary. There’s a tsunami that crashes through the middle of the film like a cascade, its glassy waters filled to bursting with the effects of civilisation, suddenly just so much detritus. And the “quarantine zone”, an abandoned city in Japan that may or may not recall Fukushima, is an imaginative visual rendering of what humanity might leave behind should we finally blow our time on earth. Compressed together, those moments take up about five minutes of viewing time. The rest you can miss.