There is no halfway, only all the way. That’s the attitude that Genoveva Rossi has for every project she’s involved in.  Genoveva is an actress that enjoys pushing her boundaries and taking on some edgy, disturbing roles that some actresses may not be brazen senough to take on. She never backs down from a challenge!  No matter what she needs to do in the film, she’s just in character and at the end of the day she’s Genoveva the lovely woman that always has a big smile on her face. 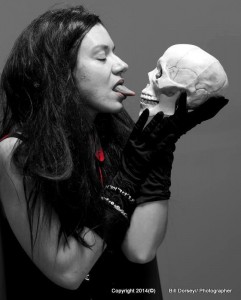 On set Genoveva is known for being the most friendly and helpful as she wants to have a good relationship with everyone she works with.   She’s a well-known scream queen, but she also loves acting in the sci-fi, comedy and drama genres. 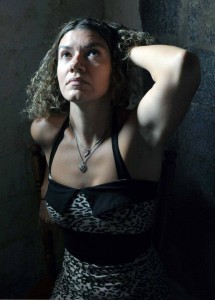 Director Jeremiah Kipp is very artistic and creative.  You starred in a few of his In Fear of Webseries (Fear of Blindness and Fear of Sexual Assault).  Can you tell us about working with Jeremiah and the episodes you star in?
GENOVEVA: I have worked with Jeremiah Kipp on a few projects: Fear of Blindness, Crave, and The Days God Slept.  Jeremiah is an extremely talented director with a really unique vision. Before we shot Fear of Blindness, he gave me a lot of information on the history and mind state of my character, which was very exciting and challenging for me as a actress. In Fear of Blindness, we follow our main character who is going blind and turning to drugs to escape from this reality. I play her best friend who, although troubled, is trying to reach out and save her friend from destruction. Jeremiah was inspired by my own interest in the spiritual when creating my character and ended up adding scenes that reflect that into the film. It was really amazing watching his creative process and I really enjoyed acting in Fear of Blindness.

Fear of Sexual Assault, although part of the In Fear of Series, was directed by Bradley Creanzo. I star as Nina Thompson, a corporate climber in the 1980’s who fires a male employee (Creanzo) for sexual assault and now that man is out for revenge. This was a really challenging role. I had a lot of exciting action and fight scenes, which were fun to act in. The lighting and music in this is superb as well.

The In Fear of series is produced by Scott Perry and is now on Italian TV! I star in Fear of Blindness and Fear of Sexual Assault and am featured in Fear of Public Speaking, directed by Debbie Rochon and Fear of Touch, directed by Jeremiah Kipp. Look for it online soon!

Check out the In Fear of here: 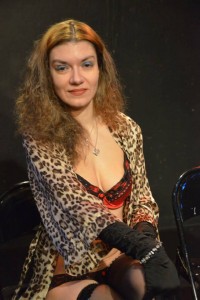 Some actresses will turn down parts because the scenes are outside of their “comfort level”.  Do you have a comfort level, or are you open to the challenges and will take on any role regardless of the material?
GENOVEVA: I am open to playing many disturbing roles: witch, sorceress, abusive mother, satanist, cannibal, prostitute, soldier, assassin, etc. Because at the end of the day, I am an actress playing a role and when I come home from a shoot I leave that character behind and go back to just being me.  I would see say that we all have a “comfort zone” just some of us have larger ones than others. I would say that as an actress I enjoy taking on edgy, exciting roles that may be out of the comfort zones of some actresses. I think I was raised with European values so nudity and sexuality in a film doesn’t really offend me much. I see it as a natural expression of the full range of human experience, which is what acting is all about representing. I am open to many challenges, but I don’t just take any role. It needs to be something that speaks to me and will excite me as an artist. 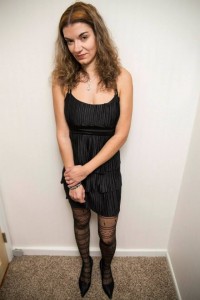 Having such a positive attitude and working with others for long days during filming. Do you take the initiative to bond and be friends with everyone you’re working with to make the long days more manageable?
GENOVEVA: I’m a Leo so I am very bright, sunny, and friendly. I love making friends with my fellow actors and crew. We are a team sharing a common goal and that can bring us very close together. Some of my dearest friends are people I have met on set and working with them is such a joy. It brings great energy to the film and adds to the enjoyment of the film team. 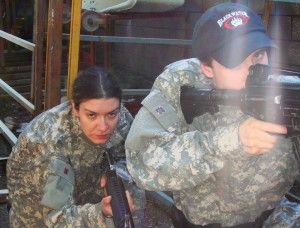 With your Italian attitude of its only all the way and there’s no halfway, I have to assume you put everything into every film, short, and any project you work on.
GENOVEVA: You are correct, they do say with Italians there is no half way, there is only all the way! I put 100% of myself into my acting and also into promoting my projects. Acting in horror films is my great passion and I see it as a sort of divine calling. It is who I am, what I do, and my great love. 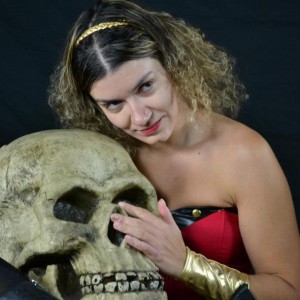 Lastly, a loaded question here, can you tell us a little about your roles and details in general about a few specific films?  One being Christian Grillo’s Apocalypse Kiss that stars Michael Berryman, Tom Atkins, and D.C. Douglas.  Also, your mother role in A Dark Place Inside , Hunters staring the great Linnea Quigley and the wild film I Spill Your Guts.
GENOVEVA: Apocalypse Kiss: I was really excited when Christian Jude Grillo approached me to play this part because it was so different from my previous roles. I play Clara, a hippie working with her brother at a cafe where the main characters go regularly. I am 9 months pregnant, poor, and irresponsible. It was amazing working with D.C. Douglas; he is a great actor and a really fun person on set. Michael Berryman is a great guy and such a huge horror icon for me. Tom Atkins is so talented. Working on this film was an amazing experience for me!

A Dark Place Inside: It was great working with Mike O’Mahoney again. I loved the experience of playing Andy’s mother in this. It was a unique and intense role. It was my 1st time playing a mother and it was great working closely with my film husband, Rob Dimension. There were some really emotional moments and it was really rewarding working closely with a child actor in my scenes. I had a great time on set.

Hunters: In this film I play a truly disturbing character, a mother who tortures and torments her children. Not a role or film for the weak of heart! Adam Ahlbrandt likes to push things to the breaking point and challenge our perceptions. I am a huge fun of Linnea Quigley’s body of work so I jumped at the chance to work with her. This may be the most disturbing role I have ever played so you really must see it when it comes out.

I Spill Your Guts: This was my first time being directed by James Balsamo and my first time acting in a sex scene. It was one of the first few films I did in the horror genre and now at around 45 or so film credits I know it will always hold a special place in my heart. It was a great experience. Check out my sexy scene.

I want to mention a few films I am currently excited to be working on: I star as a reporter in Trailer Heaven, a film by Michael Chartier, I star as an evil sorceress in Hylo Dekan Studio’s The Enchantress, I play a mysterious doctor in Sanctum Deep by Geraldine Winters, I play dual roles in the The Soulless by Chris Eilenstine, I play a witch in Witch’s Blood by Ryan Scott Weber, etc

With a lot of exciting projects coming out, definitely get connected to stay up to date with Genoveva’s upcoming films. 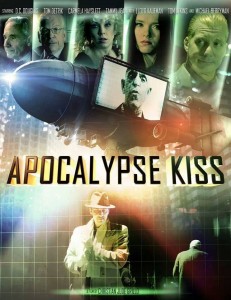