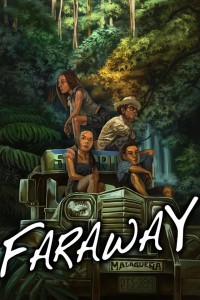 Audrey, a determined young American woman, arrives in the Philippines with a mysterious mission, little money, and no chance of success. But when she enlists the help of two friendly locals, Hazel and Rey, and an extremely unfriendly American expatriate, Nick, suddenly the possibility of success comes into view. All they have to do is cross 300 miles of roads, jungles, and ocean, ward off the attacks of a vicious local motorcycle gang, and keep themselves from killing each other. It’s going to be a bumpy ride.

Bumpy ride is an understatement with all the adventure, comedy, drama and literally bumpy ride on the remote roads for this road trip that was brought to us by writer/director Randal Kamradt’s production company Soliloquy Films and Maria Olsen’s MOnsterworks66.

The journey begins fun and carefree with Audrey (Dana Jamison) pursuing an ancient Philippine’s legend. Audrey is a determined woman that takes no crap, but she’s not mean about it and she’s very likeable. She recruits Nick (Nick Medina) as her guide. Nick is another American, who is a screenwriter that lost his agent and has nothing to lose. He’s very sarcastic and occasionally lazy, but also helpful. Their conflicting yet complimenting personalities add to the entertainment of the film. As expected a strong relationship builds between the two over the course of their journey and I can even see the two doing a sequel. 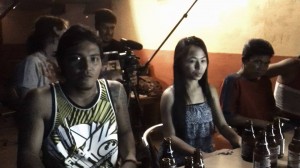 Shortly after they begin their travels, they catch a ride with the young and in love couple Hazel and Rey who ran away from their parents not accepting their relationship. Rey “borrowed” his aunt’s vehicle, a true shaggon wagon.

Genelyka Castin plays the role of Hazel and Leonard Olaer plays Rey. Both of them in real life are Philippine residents, along with other cast members. We asked Randal how he casted the local talent.

“Genelyka and Leonard came to us through auditions. We actually went to the local university and asked the faculty if we could see and audition some students, whoever they thought would be ideal. There isn’t an acting program at their school, but they often do dance presentations and such. There were several promising female candidates, and Genelyka stood out as the best based on her attitude, english skills, looks, and some solid prior acting experience. None of the men sent by the school stood out to us, so it seemed that Rey would be the much tougher part to cast. After we’d seen everybody for that day and we were packing up, Leonard burst through the door. He hadn’t been selected to audition, but heard about us through rumors around the school. He basically demanded an audition right there and stated that he was the one and only true candidate for the part. His passion was acting, and this was finally his big chance. It didn’t take long for us to realize that he was right, and after a brief interview we agreed to do the movie together.” Randal shared. 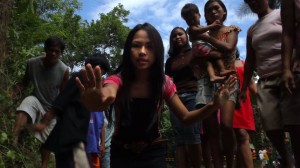 Randal added “In addition to Genelyka and Leonard, we assembled a pretty large cast of locals, almost none of whom had any prior acting experience. The most fun group for sure was the bandits, most of whom work ordinarily as drivers. We basically hired the whole group based on their looks and had to just hope that they could act on camera. Luckily, almost everyone in the Philippines is a willing, confident actor who loves to ham it up! The most pleasant surprise was Vivencio Mataganas, who played the bandit leader. He actually was brought in to play a much smaller bandit part with no lines, but got promoted when our old bandit leader couldn’t make that day and had to be put in another part (as the leader of the second, card playing bandit group). He was informed of this the morning of filming and given just minutes to learn each of his lines. But for whatever reason he took to it like a fish to water and quickly became one of the most memorable characters of the film, simultaneously hilarious and horrifying. I assure you that in real life he is actually the nicest guy in the world.” 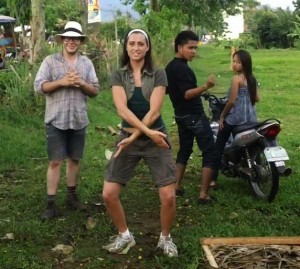 The real action and conflict arises in the film when Hazel and Rey have a “break up” and they drown their sorrows at some local pubs. Hazel ends up going off on a drunken rant about Rey and their pursuit of the ancient legend and treasure, which attracts the attention of a few thugs. Throughout the rest of the film, the thugs pursue them. Audrey, Nick, Hazel and Rey have to outrun, fight off, and save Nick after he’s kidnapped by the thugs. The conflict between the group and thugs escalates and so does the violence. Audrey is so determined and destined to reach her goal that not even the thugs can stop her. Fortunately for the audience throughout the journey, Nick enlightens tense moments with his sarcasm and comedy. 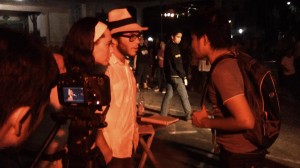 Faraway would be an enjoyable film no matter where it was set, but the Philippines setting with breath taking views adds exotic scenery that’s makes the film even more fascinating. When asked about scouting locations for the film, Randal told us, “I arrived with my team in Philippines 3 months before the start of shooting with script already complete, so we spent much of that time scouting the locations. Really just about every place we happened upon or visited looked great and it was really more of an effort to select the best locations out of the massive multitude we were presented with. Much of the photography and blocking of scenes were centered around making every location look as good as possible. The title of the film is ‘Faraway’ and the mythic themes of the film center around the setting being presented as an untouched paradise far from the grip of mankind and urbanity. So just about every aspect of the filming process was dedicated to making the Philippines look as good as we could get it on our budget.” 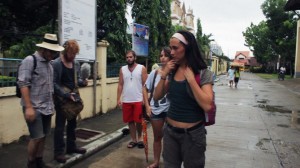 Faraway is a visually stimulating film were each minute progresses with thrills, drama and comedy that keeps you captivated up to the final scene.

For more in depth information about the filming of Faraway, check out Randal’s article on Filmcourage.com 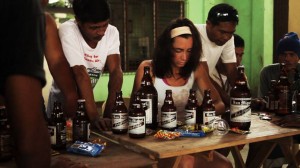