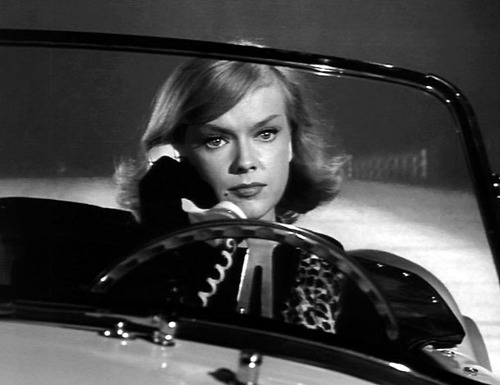 A perfectly proportioned, leggy blonde with a beauty mark just to the right of her demure smile, Anne Francis was the go-to gal for the roles of ingénue, bobbysoxer, and sweet young thing at MGM, circa late 1940s and early 1950s. Stardom remained elusive until Francis landed a supporting role in the now legendary science-fiction classic Forbidden Planet, loosely based on Shakespeare’s The Tempest.

That was fitting, as the producers correctly cast this living doll as such stuff as dreams are made on. While younger viewers were captivated by Francis’ mechanical co-star Robby the Robot and various spectacular special effects, all others had eyes glued to the willowy blonde’s unbelievably short, skimpy dresses (racier versions of the “futuristic” costumes had been ruled out by the studio, so who knows what might have been). In any case, Francis’ Altaira merged the pin-up girl with sci-fi movies a decade before Jane Fonda’s Barbarella was orbiting planets in her birthday suit.

That’s not to suggest that the lovely Francis was merely an empty image. Before Forbidden Planet, she had viciously parodied Hollywood’s femme-fatale, man-eating vamp stereotype in Susan Slept Here, and she was clearly at ease portraying a dungarees-and-ball-cap tomboy for Bad Day at Black Rock, in which she exhibited no small skill at driving Jeeps or fending off bullies. Someone must have noticed that Francis, if called upon, could be one of the boys, to say nothing of her sly smile that more than hinted at her worldly wisdom. She was a honey who could handle herself, and so it was destiny that Francis would wind up in “Honey West,” a private-eye thriller with a female lead.

The TV show lasted for a single 29-episode season, but the thirty-something, ridiculously fit Francis made a lasting impression as a private eyeful. Sometimes clad in a leopard-print leotard and fishnet stockings (or perhaps a solid black bodysuit for stealth work), the tough-as-nails Judo expert drove a Cobra convertible, hid a two-way radio in her lipstick case, and enjoyed downtime at home with her pet ocelot Bruce.

Despite Francis earning an Emmy nomination and a Golden Globe award, executives somehow concluded that there wasn’t room in television land for two female crime fighters. Honey West vanished when Emma Peel of “The Avengers” hit American shores. In the long run, that hardly mattered for Francis, whose five-decade career of guest appearances landed her a role (or roles) in almost any television drama or crime thriller you can name. (80, pancreatic cancer) —DP