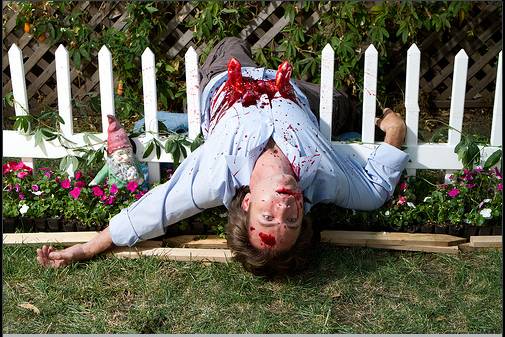 First a bit of backstory: The Asylum was formed by David Michael Latt, David Rimawi and Sherri Strain in 1997. Rimawi and Strain had been executives at Village Roadshow, and upon leaving teamed with writer/director Latt to start a genre distribution and production company. In the early days Asylum was mainly a distributor, and the films were all over the place – thrillers, comedies, dramas, horror films, etc. – but it was horror The Asylum execs first set their production eye upon. Killers, a hallucinogenic, bloody thriller directed by David Michael Latt, was the first film produced by The Asylum in their first year together. Five years later it would spawn a sequel that would also mark the beginning of The Asylum’s rigorous production routine that would soon make them one of the most prolific independent studios in Hollywood.

Approximately fifteen horror films were released by The Asylum between 1997 and 2005, making them the company’s primary production focus until the mockbuster came along. Of these films, the overwhelming majority were based upon some variation of legend or myth, the very basis of genre horror: angered spirits (Scarecrow, Intermedio), vampires (Way of the Vampire), mummies (Legion of the Dead), pirates (Jolly Roger: Massacre at Cutter’s Cove), Frankenstein’s monster (Frankenstein Reborn), werewolves (The Beast of Bray Road), zombies (Death Valley: the Revenge of Bloody Bill) and, of course, demons (Shapeshifter).

No matter how broad their appeal, however, these films got lost – along with so many others from so many other small production companies, many of which are now long-defunct – in a sea of direct-to-DVD horror that choked the marketplace in the wake of the genre’s popular revival in the late-90’s thanks to films like the Scream franchise and The Blair Witch Project. But while other companies reacted to the problem by pushing out even more films in the same vein, The Asylum took a gamble and shifted their marketing strategy, as well as their place in film history.

In 1995, Asylum executives had a game-changing idea. That was the year Steven Spielberg was set to deliver his long-awaited version of H. G. Wells’ classic novel of alien invasion, War of the Worlds. As the story wasn’t original to Spielberg, there was nothing to stop anyone else from making a competitive version but the revered filmmaker’s own clout and ego. And who cares about that? The Asylum rushed a version into production starring former Hollywood heavy-hitters C. Thomas Howell and Judd Nelson, two fine actors who’d had doors shut on them The Asylum was only too eager to open. The result? 100,000 copies ordered by Blockbuster, blowing all other orders on all previous Asylum titles clear out of the water. The rest is history.

On the horror front, The Asylum continued to produce a large number of films in the genre during this era – eleven, depending on how you define the genre – but as with The Asylum’s sci-fi output, across the board these were mockbusters, or tie-ins:

Exorcism: The Possession of Gail Bowers The Exorcism of Emily Rose

When a Killer Calls When a Stranger Calls

Hillside Cannibals The Hills Have Eyes

The Hitchhiker The Hitcher

With the exception of Snakes on a Train, most of these films flew under the radar in terms of cultural awareness, the flashier sci-fi tie-ins like Transmorphers, Terminators, and King of the Lost World garnering the most media attention. But as the mockbuster era continued to flourish throughout ’07 and ‘08 in the arena of sci-fi, The Asylum cut back on the number of horror films it produced. 666: The Beast, arguably the last horror film of this era, would see two years pass and twelve more films made before there was another horror title in the Asylum’s filmography. But this would turn out to be just a trimming of fat, so to speak, a sacrifice in the quantity of years past for the quality to come.

In late 2009 when The Asylum released Mega Shark vs. Giant Octopus, yet again the wheels in their marketing minds began to turn. Mega Shark, as we all know, went on to become the most notable film in The Asylum’s catalogue and was the eighth-most Googled trailer of the year thanks to a now-infamously-classic certain plane-chewing scene, an astounding accomplishment for an independent studio in arguably one of the most spectacular years in Hollywood history, visually-speaking (Avatar, District 9, Star Trek, Transformers 2, 2012, Terminator Salvation, etc.). As a result of this success, The Asylum began pushing out other similarly-conceived films, including MegaFault, Mega Piranha, the upcoming Mega Shark vs. Crocosaurus (out 12/21/10!!!) and Mega Python vs. Gatoroid. In an interview aired October 2nd of this year on “Last Call with Carson Daly,” Asylum honchos Latt, Rimawi and Paul Bales seemed to indicate this was a direction production would continue to head in. So what does this mean for Asylum horror? Will creature flicks absorb both sci-fi and horror productions, meld them into some composite terror? Not likely.

Though The Asylum has only released four horror films since 2009 – The Haunting of Winchester House, Paranormal Entity, 100 Feet and 8213 Gacy House – three of the four have been completely original (Paranormal Entity was just begging to be made), and coincidentally, perhaps, or perhaps not, all four have been ghost stories. Doubtful this is a specific trend – the ghosts – but what it does seem to be is The Asylum’s return to stand-alone horror, so to speak; original stories that don’t need to draft off of a studio release to find an audience.

Trying to predict the future of the Asylum is like trying to predict what number a many-sided die will land on when rolled; one can only guess. But horror has always been the backbone of The Asylum’s productions – however manifested – and in fact, it’s where they’ve been the most original and most daring. In an era where every half-baked scary story or gore-fest is slapped onscreen, The Asylum, in this modern era, at least, seems to be doing something popular media’s conception of them would find contrary: they’re discriminating. And for us, the committed, this may not mean a horror flick every few months, but it means when we do get them, we’re guaranteed that good scare.

From The Attack from Planet B