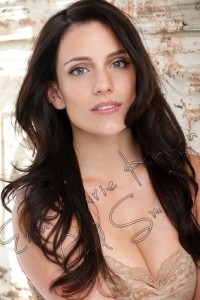 Born and raised in St. Louis Missouri, Erin Marie Hogan began singing, acting and dancing at a young age.  When she moved to L.A. she starred in the film Paranormal Entity.  It was only fitting to be Erin’s first feature film because her parents claim that Erin as a young child had conversations with her deceased grandfather.  Since then, Erin has been in numerous features including Jared Cohn’s Hold Your Breath along with many other shorts, and TV series.

Her upcoming films include Brandon Slagle’s horror House of Manson and Throwdown (formerly known as Beyond Justice) with Danny Trejo and she’s starring with Devanny Pinn in  Dwelling.

Dwelling starring yourself and Devanny Pinn is currently filming. Can you tell us about your character and the film in general, including the rigorous physical training you did in preparation for the role?
ERIN: My character Ellie is extremely emotionally damaged, though she appears serene, and at peace.  It’s an interesting thing to play a character who is trying to hide who she really is.  A long time ago, an incident with her sister River (Devanny Pinn) traumatized Ellie for life, and she feels she needs to make contact with the other side for closure.  I think a lot of people can relate to that feeling, though most would never act on it.

My training schedule was difficult, but was not suggested by the production company-it was my choice.  I’d gotten to a point that I was unhappy with my body, and saw playing Devanny Pinn’s sister (Dev is significantly shorter than me, and smaller proportionately) as an excuse, or opportunity to push myself.  I run four days a week, I lift weights three days a week, and I do some kind of outdoor activity twice a week.  Along with that, I dyed my hair darker, and have been getting more color in my skin.  Devanny Pinn has a darker skin tone. We are trying to meet somewhere in the middle so we look more like realistic sisters.

A couple of other highly anticipated films you have due out later this year are House of Manson directed by Brandon Slagle and Beyond Justice with Mischa Barton, Danny Trejo, Vinnie Jones, and Timothy Woodward Jr.  Can you briefly tell us about working on those films and do you know when and how they’ll be released?
ERIN: House of Manson was my second film with Devanny Pinn, (the first being Hold Your Breath) but the first chance I got to work along side her.  She’s a brilliant performer, and takes her job as an entertainer and a filmmaker extremely seriously.  It is nerve-racking to portray a character that people remember so vividly.  My mother remembers the Manson situation as though it just happened.  We studied every movement, every tick.  The way they spoke, the way they carried themselves… All these things are extremely important, especially because some of these real-life people are still alive.  The trials were such a sensation, everyone remembers these people so clearly.  It’s important, and scary, to portray them realistically.  It was also nice to escape for a bit from being the “eye candy,” of the film.  I take being cast in those roles as a huge compliment, but I don’t see myself that way at all.  Manson had an interesting dynamic.  The cast ended up really being a “family.”  There was a lot of staying up, singing songs, playing games together… it was like the real Manson family, minus all the drugs.

Beyond Justice (now called Throwdown), like House of Manson, was a great chance for me to move out of horror.  My character Amanda Torres is a strong one, someone I think a lot of actresses would like to portray.  She has things to hide, a family to protect, and a past she wants to escape.  There is a lot of depth to the character.  I also got to do some cool action, and suffered a bit of abuse (including a chipped tooth!) but I don’t mind.  This is a character with a lot of ups and downs.  She’s badass, but she’s calm and collected.  I really like that about Amanda.  With so much going on in her life, so much in her past, and so much to lose, she keeps her composure, and she maintains her loyalty.  Anyone who knows me knows loyalty is my number one priority, so Amanda and I would get along just fine.  Working along side such great actors, with fantastic bodies of work is an experience I hope to get again soon.  I got to have scenes with Mischa Barton, Danny Trejo and Vinnie Jones (but don’t forget Luke Goss is in the movie too!)  I also got had the chance to work closely with Timothy Woodward Jr., Said Faraj and Isaac C. Singleton Jr. which was awesome. 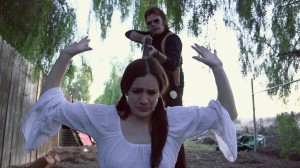 When you starred in Paranormal Entity you received a short script that basically outlined the film.  A majority of the film was improving. How was that experience and was all the improving beneficial to your acting career?
ERIN: I think being forced to improve an entire feature film was definitely beneficial to my acting chops.  The honest to God truth is, I’ve never been great at improv.  I’m a bit slow on my feet, but in a more dramatic situation, I’m given time to think, and consider.  Acting is all about listening.  Even when your lines are written down for you, you have to listen to the other characters.  You have to take in what is being said, and then naturally, you’ll react accordingly.  I received a lot of compliments on my choice to be “silent, and brooding,” but to be truthful, I felt that’s why Samantha Finley would do.  With her mother (Fia Parera) and her brother constantly at each other’s throats, what could she possibly say?  “Excuse me, but I’m the one the demon thingy hates, so stop yelling at each other?”  I thought that reaction was unlikely and unrealistic. 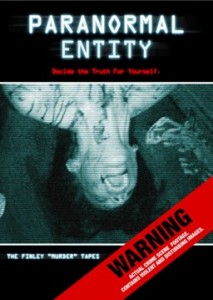 In the past you dabbled with directing and said maybe later you’d give it a shot again.  Currently, is there any possibility that you’ll direct again or anything else like writing?
ERIN: Absolutely not!  I don’t have any interest in directing again.  I love acting, and I don’t think I-or many people- are capable of directing themselves.  That’s a talent very few people possess.  It would be arrogant of me to believe I am one of the special ones.  I’m also not a writer.  In fact, I struggled with screenwriting in college.  This is one of the reasons I focus so much on getting the wording right, getting the message across by saying what is written, and not improvising unless I am told to do so.  I don’t think it’s my place to change the lines without asking because I believe the writer wrote the script the way it is written for a reason.  I’ve tried writing and it did not work out, so I respect writers and I do my best to do their art justice.  However, I would not rule out the possibility of me producing my own film in the near future.  Nothing is set in stone, but I’ve been in this industry for 14 years, and I’d like to choose a film I want to do, that I feel connected to, and show the world what I am capable of.

Regarding a very serious topic, tragically you lost a close friend to heroin and almost another.  You’re involved in a foundation to help others with the addition.  Can you highlight the critical issues, about the good Samarian law, and how people can get involved?
ERIN: Absolutely.  A friend of mine over-dosed after being clean for 11 months.  She suffered kidney failure, and doctors seriously considered dialysis.  She also suffered from a condition called Rhabdomyolysis, which is common in heroin users.  When she OD-ed, she passed out sitting in one position for about 12 hours.  Because of this, the muscles in her leg broke down, releasing myoglobin into her blood stream.  The over-load of myoglobin is what caused her kidney failure, too much of that protein was just too much for the kidney to filter out.  As a result, she had absolutely no feeling or control over her legs as well.

One of the reasons the reaction was so bad, was because the people my friend was doing drugs with left her sitting in that position, and did not call 911 when they saw she needed help.  In fact, upon waking up she was shoved in the elevator, and sent to the ground floor where security guards found her crawling on the ground.

The Good Samaritan Law would be extremely helpful in this kind of situation.  In most states (in relation to drug use) it works as follows: Those who call 911 for someone in need due to an overdose, as well as the person suffering the overdose, will not be arrested or prosecuted for drug possession, possession of paraphernalia, or being under the influence at the time of the occurrence.  This means people using a substance with a a person who suffers a fatal reaction, can feel at ease calling 911 and saving that person’s life.  This does not exclude the people involved from being arrested or prosecuted in the future for other drug-related offenses, and does not relieve them of any prior offenses.  There is also talk of making a non-addictive drug available that can be administered to someone suffering an overdose, to reduce the effects of the illegal drugs consumed.

If you are lucky enough not to lose your loved one, stay diligent!  Parole officers are appointed officials who depend on friends and family to inform them of the every day behavior of the user/recovering addict.  If they do not hear from the family, they have no reason to question the actions of the person they are in charge of.  It is my opinion that if you care about your loved one, you will stay informative. It is better to see you son, daughter, friend, parent in prison, than in a casket.

I contacted the parole officer of that friend of mine when she began violating her parole to an unacceptable extent.  It resulted in a screaming match, lots of crying, the end of our friendship, and an onslaught of attacks on my character on social media.  But it needed to be done.  I have no proof she was doing drugs, I only know her actions violated the terms of her parole, and that is the beginning of a relapse.

B Movie Nation can’t thank Erin enough.  Be sure to check out her website and social sites which are full of additional information about Erin along with Photos, Events, Videos and so much more.