“Commandos” was released in 1968 and has been in circulation on public domain home video (and now DVD) in the United States and abroad since the early 1980s. A great widescreen print has now surfaced on DVD, one from the Platinum Disc Corporation and another from St. Clair Vision. This is one of the easiest to find Italian war films, and it’s really not too shabby, either…

On the eve of the American lan 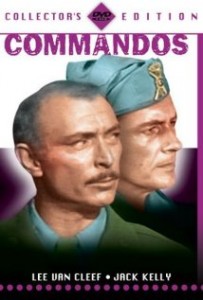 dings in North Africa, a band of Italian-American soldiers are recruited for a special mission behind the enemy lines. They will capture and hold a vital oasis the day before the Allies land. Unfortunately, the garrison of Italian soldiers and a German Panzer unit will do anything to stop this takeover.

Director Crispino is all about style, and just about everything else is disregarded here. The main conflict is between Sergeant Sullivan (Lee Van Cleef, “The Good, the Bad and the Ugly”) and Captain Valli (Jack Kelly, “To Hell and Back”). Sullivan is an experienced veteran, and Valli is a rear-echelon officer who really shouldn’t be in charge. Sullivan questions Valli’s authority every step of the way. Unfortunately, this conflict remains shallow throughout, and the characters do little besides yell at and threaten each other. As an individual, however, Sullivan is a fleshed-out, battle-scarred veteran who’s haunted by images of a failed campaign in the Pacific. Sadly, Van Cleef overacts through every scene, chewing up the scenery so much that it’s hard to take him seriously.

The kudos go to the supporting cast, who manage to put on a convincing show from start to finish. Joachim Fuchsburger is fabulous as Lt. Heitzel, a German professor who is now drafted as a Panzer officer. He hates the war, but does his duty for country. Heitzel’s character draws sympathy from the audience is his character is naturally fleshed out over the course of a long dinner scene with Valli and Tomassini. It’s very nice to see a late-1960s war film in which a German character has a sympathetic role, rather than a clichéd “evil Nazi” part which was so common in other action films produced during the era. On the other hand, Götz George is equally good as Lt. Rudi, a dedicated Hitler Youth-type. The Germans and Americans discuss culture and politics over dinner in one long scene, and this makes their face-to-face encounter during the final battle all the more moving. Finally, there’s Marino Mase (“The Five Man Army”) as Lt. Tomassini, who commands the Italian garrison and will stop at nothing to escape with the survivors and liberate what’s rightfully his. Add to this long list some excellent small roles filled by Ivano Stacciolo, Pier Paolo Capponi, Heinz Reincke and Romano Puppo.

Crispino’s focus is on the action, and makes the characters just believable enough to appreciate the big, explosive proceedings. The American takeover of the Italian garrison is excellently shot and finely edited, and the climactic tank battle in the oasis is purely awesome. It’s filled with great shots of people getting shot, tanks exploding, bullets kicking up puffs of dirt – there are some shots with action going on in both the background and foreground, making for interesting composition.

The movie has a very realistic look and feel to it, as well. The Americans and Germans are appropriately armed and clad for the time period. The sweltering sun and dry desert are completely convincing. The oasis set is massive and Crispino makes use of every part of it. The interiors, particularly the big dining room, are well-captured with wide shots and pans. At night, the set is well-lit and the action is completely clear.

“Commandos” is a well-written, well-shot and action-packed war drama with a fine supporting cast and some nail-biting combat sequences, which put it a notch above many other Italian war productions in the same vein.