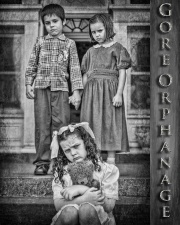 Gore Orphanage is an upcoming film about a terrifying urban legend that originated from the 1800s and has been haunting the townspeople of Vermillion in Lorain County Ohio ever since. Fires, diseases, hauntings have terrorized the Gore Orphanage ruins and the film will sure to frighten the audience.  Ever since the tragedy, the local woods have been considered haunted by the children.  Cody Knotts and his wife Emily Lapisardi learned of the event and hauntings when passing through and were so intrigued by it that they immediately starting envisioning the film. Who better to star in the film than Maria Olsen who is infamous for her many roles in horror films.   See Press Release below for more information.

March 31, 2015-Pittsburgh, PA- The first trailer for Horror Society’s most anticipated film of 2015 was released this week.  Based on the most popular urban legend in the state of Ohio, Gore Orphanage was filmed in the summer of 2014.

The film is a female-centered horror story directed by Emily Lapisardi in her directorial debut.  Filmed in 2014 in Scottdale, PA, the story is set in the 1930’s and follows the life of Nellie, an orphan, who is brought to Gore Orphanage and discovers quickly that some things are worse than losing your family.

This is the fifth film produced by veteran independent producer Cody Knotts (Pro Wrestlers vs Zombies) and was filmed in Scottdale, PA with a cast of over 20 local children in addition to the actors listed above.   Knotts has worked with such horror icons as Doug Bradley and “Rowdy” Roddy Piper in the past.

The film was a husband and wife collaboration of Mr. Knotts and Ms. Lapisardi.  Mr. Knotts wrote the film to impress his then fiancée, who was inspired by a road sign in Ohio during travel for Knotts’ film Pro Wrestlers vs. Zombies.

Sure to shock and scare audiences, keep an eye out for Gore Orphanage! http://www.imdb.com/title/tt3831242/?ref_=fn_al_tt_1
If you have some thoughts to share about this article or you’d like to discuss B movies with other B movie fans and filmmakers please visit our B Movie Nation Facebook group.