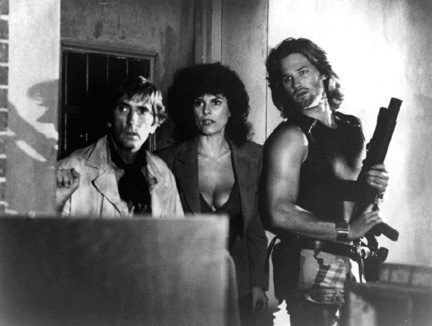 Adrienne Barbeau began appearing in local theater productions as a teenager in San Jose. As a struggling young actress in New York, she earned the rent as a go-go dancer. Her big break came when she joined the cast of Broadway’s original Fiddler on the Roof, which starred Zero Mostel as Tevye and Bea Arthur as Yente, the Matchmaker. Barbeau was later nominated for a Tony, playing Betty Rizzo in the original Broadway cast of Grease. From 1972-78, Arthur and Barbeau worked together on the hit television series Maude. Arthur played the title character, a crotchety old dame, and Barbeau played Carol, Maude’s pretty, buxom daughter. Almost as soon as the TV show debuted, Barbeau became a sex symbol.

Barbeau married moviemaker John Carpenter, who cast her in several of his late-’70s and early-’80s thrillers, including Someone’s Watching Me!, The Fog, and Escape from New York. The Scream Queen of her day, she also starred in George Romero’s Creepshow and Wes Craven’s Swamp Thing, but she was not involved in The Return of Swamp Thing. Perhaps due to horror typecasting, Barbeau’s career faded quickly. Since divorcing Carpenter in 1984, her most prestigious parts have been a supporting role in Rodney Dangerfield’s Back to School and playing a tattooed snake charmer on HBO’s Carnivàle.

She has worked almost exclusively in TV movies and low-budget films, including Cannibal Women in the Avocado Jungle of Death with Bill Maher, Burial of the Rats with Olga Kabo, and the ghosts-and-Nazis thriller Unholy with Nicholas Brendan. She voiced Catwoman for Batman: The Animated Series. Barbeau is now married to playwright and actor Billy Van Zandt, and they appeared together in a 1999 film of his play A Walk in Providenc