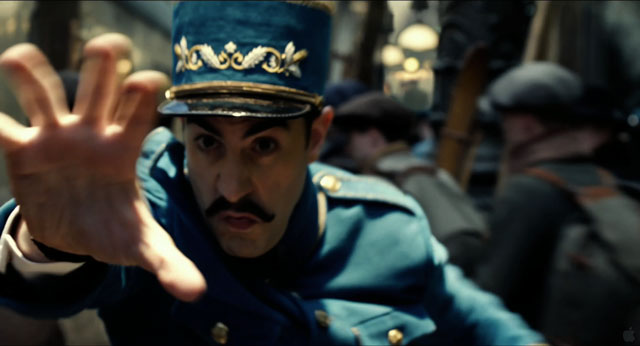 “Hugo” continued its dominance in the technical categories at the 84th Academy Awards as Rob Legato, Joss Williams, Ben Grossmann, and Alex Henning won the Oscar for Visual Effects.

The “Harry Potter” movies have earned billions of dollars and delighted millions of moviegoers. And yet, the Academy of Motion Picture Arts and Sciences has treated them with a lack of respect bordering on contempt.

The only other nomination received by the critically lauded finale to the “Harry Potter” series was for makeup: Nick Dudman, Amanda Knight, and Lisa Tomblin were nominated against Martial Corneville, Lynn Johnson, and Matthew W. Mungle for “Albert Nobbs” and Mark Coulier and J. Roy Helland for “The Iron Lady.” That award was won by “The Iron Lady.”

And how many Oscars has the series won, you may wonder.

None. Not a single Oscar has been awarded to the highest-grossing film franchise in history.

Genre pictures have never done well with the Academy. Only 12 westerns have been nominated, including last year’s “True Grit,” and to date only 3 (“Cimarron,” “Dances With Wolves” and “Unforgiven”) have won. The Academy does not yet treat science fiction, let alone comic book adaptations with respect. Few science fiction movies have ever been nominated for Best Picture. None have won. Fantasy has fared slightly better, partly due to the “Lord of the Rings” movies. No comic book adaptation has yet been nominated for Best Picture.

Alfred Hitchcock was largely perceived as a technical whiz whose films lacked depth. And he too was perceived as a genre director, although his field, the suspense thriller, is treated with slightly more respect now than when he was making them. (“Silence of the Lambs” did Best Picture. Hitchcock’s “Rebecca” also won Best Picture, in 1940, although the Academy may not have considered that a thriller.)

The expanded slate of Best Picture nominees (there used to be only five) is largely a response to the well-deserved criticism received by the Academy after Christopher Nolan’s “The Dark Knight” received paltry nominations. Nolan may be the new Hitchcock. Last year’s “Inception” was nominated for 8 Academy Awards: Best Picture, Best Original Screenplay (by Christopher Nolan), Art Direction, Cinematography (Wally Pfister), Best Score, Sound Mixing and Sound Editing, and Best Visual Effects, winning the awards for Best Cinematography, Sound Mixing, Sound Editing and Visual Effects. And that was the best any Nolan movie had ever done.

“The Wizard of Oz” won Oscars for its score and Best Song. That was it. (Of course it was up against “Gone with the Wind.”) “The Exorcist” won Oscars for sound and Best Adapted Screenplay. Julie Andrews did win an Oscar for “Mary Poppins,” partly because voters were so outraged over the fact that the creator of the role of Eliza Doolittle in “My Fair Lady” was passed over for the role in the movie. She was going to get an Oscar thrown at her as soon as possible. “Mary Poppins” also won four other Oscars, most of them for music, with an award for visual effects. “It’s a Wonderful Life” was nominated for four Oscars, and didn’t win any. 1933’s “King Kong,” one of the most iconic movies ever made, wasn’t nominated for a single Oscar. No, not even special effects.

Science fiction has fared no better. “2001: A Space Odyssey” won an Oscar for visual effects. The groundbreaking 1968 “Planet of the Apes” got an honorary Oscar for makeup. “Star Wars” actually has done the best of any science fiction movie, garnering six awards, for Art Direction, Costume Design, Visual Effects (no duh), Editing, Score and Sound. And to be honest, no one is going to look at “Star Wars” in retrospect and claim the actors got robbed.

“The Lord of the Rings: The Return of the King” put the Academy in a bind. By the time the third installment came out, it was so painfully obvious that this was not only a lucrative commercial franchise, but a quality product and a stunning achievement of cinematic generalship, they had to give it some heavy metal. And still, not one award for acting. But it’s a lot more recognition than The Boy Who Lived is checking out with. Warner Bros. and the Harry Potter cast and filmmakers may just have to content themselves with the fact that their work has been seen and loved by millions, including an entire generation of college-aged kids who have literally grown up on it.

Bob Hope is said to have once remarked about the commercially successful but often critically drubbed Cecil B. DeMille that he brought something new to the motion picture business: customers. And Harry Potter will have to be content with that.

Continue reading on Examiner.com What does the Academy have against fantasy (and science fiction)? – National Fanboys | Examiner.com http://www.examiner.com/fanboys-in-national/what-does-the-academy-have-against-fantasy-and-science-fiction#ixzz1ncN6ZEVp

\from The Examiner im Dixon