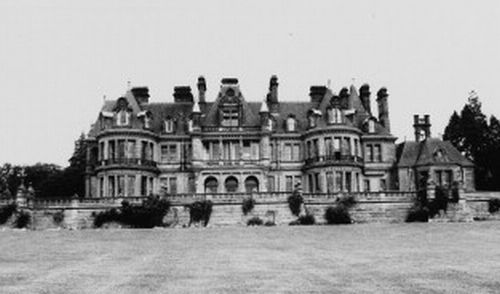 There’s no “welcome” mat at the Belasco House. Once you walk through the gate to approach the fog-enshrouded mansion the first thing you will notice are bricked-up windows, so that no one can see in – or out. This place has a bad reputation as a den for “Drug addiction, alcoholism, sadism, bestiality, mutilation, murder, vampirism, necrophilia, cannibalism, not to mention a gamut of sexual goodies.” It’s also where twenty-seven dead bodies were found back in 1929. Even decades later ominous voices can be heard, objects move around on their own, ectoplasmic formations spindle through the air, chandeliers suddenly crash to the ground, flames burst through the fireplace like giant tongues, plates and other dishes turn into flying daggers, unwelcome ghosts make sexual advances on the human guests, and even the local pussycat can be more dangerous than a hungry mountain lion.

Mr. Deutsch is a dying millionaire who wants to know if there’s life after death. He offers three psychic phenomena specialists a large sum of money to carry out experiments in parapsychology at this property he owns that has the reputation of being the “Mount Everest of haunted houses.” Mr. Fischer (Roddy McDowall) is a physical medium and also the sole survivor of a previous incursion into the house in 1953 – well…there were a few others who came out “alive,” technically, but they were rendered insane and permanently disabled. Miss Tanner (Pamela Franklin, the British child star from The Innocents, 1961) is a mental medium whose tender psyche is perfect for channeling spirits and conducting séances. Dr. Barrett (New Zealand actor Clive Revill) is a physicist who wants to bring in a large machine to “de-energize” Hell House. Also tagging along is Dr. Barrett’s gorgeous wife, Ann (Gayle Hunnicutt).

Prolific writer Richard Matheson is no stranger to adapting his printed works into screenplays. He did it with The Incredible Shrinking Man (1957, adapted from The Shrinking Man), The Last Man on Earth (1964, adapted from I Am Legend), the made-for-TV Duel (1971), and The Legend of Hell House (1973, adapted from Hell House) – others also followed.

The director of The Legend of Hell House, John Hough, got his start as an assistant director on the snappy British spy show The Avengers (1968). From there he covered a wide range of films veering from a Hammer production (Twins of Evil, 1971), to a successful car chase film (Dirty Mary, Crazy Larry, 1974), some fondly remembered Disney films (Escape to Witch Mountain (1975), the sequel Return from Witch Mountain (1978), and The Watcher in the Woods, 1980), and more horror films (The Incubus (1981), American Gothic, 1987).

According to Roger Ebert, Matheson’s work from the 1950’s and 1960’s “anticipated pseudorealistic fantasy novels like Rosemary’s Baby and The Exorcist” – this last title being a film that was released the same year as The Legend of Hell House. But, fortunately for Hough, his film came out six months before The Exorcist and thus was spared the fate of being completely eclipsed by the mammoth success of Friedkin’s film for those few months. But there’s no denying that The Exorcist tapped into the horrors of the zeitgeist with more zeal. Next to the terror of watching a small girl get possessed by the devil and spew out all manner of bile, a big house with ghost issues seems quaint by comparison. Seven years later, Stanley Kubrick would remind people that yes, in fact, a “haunted house film” could still scare the pants off of a modern audience.

In all likelihood, Kubrick even cribbed a thing or two from The Legend of Hell House, such as its striking reminders of day and time, not to mention inspired cinematography that places viewers into all kinds of odd crooks and crannies and which allows the large and ornate interiors to resonate in full view. In terms of the former, The Legend of Hell House uses subtitles that go in chronological order, starting with “FRIDAY, DECEMBER 17TH, 4:08pm,” and that go all the way up to “FRIDAY, DECEMBER 24th 4:59pm” (with about twenty other subtitles in-between). Kubrick’s approach is, admittedly, more unsettling, because what he does in The Shining (1980) is give his time-markings their very own title-cards which, as the pacing gets more delirious, appear at odd intervals to herald “Tuesday” or “Saturday” or “3:00pm” – as if to say, it just doesn’t matter what day or time it is, you’re never going to escape.

The Legend of Hell House and The Shining are definitely kindred spirits of the haunted kind. It also speaks volumes that in both you have actors delivering some over-the-top performances while possessed by evil spirits. In The Shining, Jack Nicholson becomes forever burned in our minds as the ax-wielding madman breaking through a door while in Hell House, you have Roddy McDowall flopping onto the carpet with what looks like a tortured yoga pose while emitting a high-pitch squeak. While the Overlook Hotel is more subtly creepy than the Belasco House, both of these places generate a palpable energy that is both intoxicating and hard to escape.