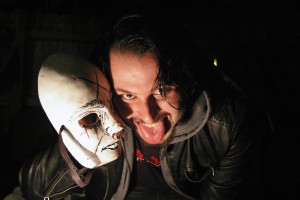 Arena Cinema, one of Los Angeles’ premiere art house haunts, is proud to announce the launch of “Campfire Fridays,” a brand new monthly event hosted and curated by indie horror filmmaker James Cullen Bressack. The series will kick off on Friday, October 9th, with a midnight screening Bressack is currently keeping under wraps.

On the last Friday of every month, “Campfire Fridays” will host exclusive late-night screenings of horror cinema’s most influential and memorable classics, programmed by one of indie horror’s hottest up-and-coming directors, James Cullen Bressack. Bressack promises a no-holds barred curation to the lineup he’ll present with Arena.The intimate Arena Cinema is a perfect Hollywood venue for dedicated horror fans to experience their favorite titles on the big screen once again, and the quiet courtyard (which runs between Arena and the back of The Egyptian Theatre, is an excellent spot for post-film discussions and networking.

“I grew up watching horror movies like a mad man. The films I watched inspired me to want to make movies and greatly influenced me as a filmmaker. It’s always been a dream of mine to be able show some of my favorite horror movies to people the way they were meant to be seen, on the big screen. I encourage people to come to these midnight horror movies in their pajamas. It’s a midnight horror pajama party!” said James Cullen Bressack. Bressack is one of indie horror’s most prolific young talents, and his most recent release, PERNICIOUS, stunned sold-out crowds earlier this year Arena Cinema. Bressack was recently on the cover of SCREAM horror magazine, and also wrote and directed a number of films, including the acclaimed HATE CRIME, which was banned in the UK, and Blood Lake, which was a top ratings getter for animal planet.

“We’re building our reputation at Arena on our relationships with distributors and filmmakers and ultra-indie enthusiasts plus in the programming of the great new genre films we present weekly. The idea to connect with filmmakers and invite curating of retro classics has been a desire for sometime. You can bet they’ll be a slew of amazing films Bressack curates for Campfire Fridays in the Fall/Winter and audiences are going to dig it. We’ve been waiting for a filmmaker like Bressack to step up and want to do this with us.” said Christian Meoli, Head Programmer and Managing Director of Arena Cinema Hollywood.

Hollywood continues to be an apex of the low budget horror genre business.