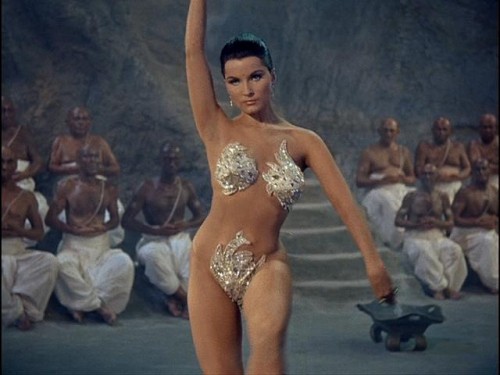 Born Debralee Griffin in Denver, Colorado, on August 19, 1933, stunning actress Debra Paget was schooled in New York, studying dance and drama. Before her 15th birthday, she was signed to a 20th Century-Fox contract in early 1948. The studio gave Paget a small role in Cry of the City (1948; with Victor Mature, Richard Conte, and Shelley Winters), and just two years later she was a featured performer in the western Broken Arrow (1950; with James Stewart and Jeff Chandler). While at Fox, Paget was often cast with leading man Jeffrey Hunter. They co-starred in several films together, including Belles on Their Toes (1952) and Princess of the Nile (1954).

After scores of westerns and costume dramas, Paget left Fox in 1955 and freelanced for a variety of studios. The death of the studio system harmed Paget’s career, and in the late 1950s, Paget headed to Germany to star in the films The Indian Tomb and Tiger of Bengal. She also acted in a few Italian-made films in the early 1960s. In 1962 Paget agreed to star in two horror films for American International Pictures: Tales of Terror (1962; with Vincent Price) and The Haunted Palace (1963; with Vincent Price). After the release of The Haunted Palace, Paget married and retired from the screen.

Paget left Hollywood and retired to Houston following her 1964 marriage to millionaire Ling Kung. Although the couple divorced in 1980, Paget has never returned to the screen. Paget’s first husband was singer David Street, whom she married and divorced in 1958. (Street was the ex-husband of actress Mary Beth Hughes.) She then married director Budd Boetticher in 1960, but that union ended the following year.

Debra Paget was not the only actor in the family. Her sisters Lisa Gaye and Teala Loring had careers in films and television. Gaye is best known for her role on the syndicated TV series How to Marry a Millionaire, when she replaced Lori Nelson after Nelson left the series. Loring had roles in a number of 1940s films. And her brother Frank Griffin acted in films in the 1950s (such as Teen-Age Crime Wave) before becoming a makeup artist.