picked “The Sadist” and “The Thrill Killers” together for a few reasons. One is because they both feature dangerous psychos on the loose. And another, more important reason is that they’re two of my all-time favorite B-movies and they represent to me the pinnacle of what can be done with a B-movie budget. Also, let’s not forget that these feature two classic B-movie icons: Arch Hall, Jr. and Cash Flagg, better known to us all as the great low-budget auteur Ray Dennis Steckler.

Think that sounds like a lot of hype? Well, take a good look at both these films and you can see flashes of true ingenuity at work. You can see the early work of one of the great cinematographers in movie history, Vilmos Zsigmond, who photographed “The Sadist” and helped out on “The Thrill Killers.” Both of these movies also use limited settings and make the most out of them. Plus, they are highly entertaining films regardless of their low-brow heritage.

Let’s start with “The Sadist” first. It’s from 1963 and tells the simple story of three teachers on their way to a baseball game when their car breaks down in the middle of nowhere. Then, they are confronted with psychotic killer Charlie Tibbs (Hall, Jr.) and his mute main squeeze Judy (Marilyn Manning), who hold them at gunpoint and force them to fix the car or face certain death.

Arch Hall, Jr. is best known for acting in movies like “Wild Guitar” (1962), “The Choppers” (1961) and “Eegah!” (1963 and also starring Manning). He got to act because of his father who owned Fairway International Pictures, the studio for which the younger Hall made his pictures. His films are often ridiculed by snot-nosed critics who dismiss them as atrocities and cite his acting as less than stellar. (However, they are loved by B-movie aficionados for much of the same reasons.) But with “The Sadist,” he hit one right out of the ballpark.

That’s because his Charlie Tibbs is, to this writer’s way of thinking, one of the scariest psychos ever captured on film. Bug-eyed and completely menacing, this kid will kill at the slightest moment because he loves killing. He also loves taunting and teasing his captives and delights terrifying them with sadistic glee. He is also always one step ahead of his victims, who try desperately to fool him and escape with their lives. Hall’s performance is so believable here that he can send icy chills down your back.

Hall is matched in menacing by Marilyn Manning’s performance as Judy. Loyal to her man because he’s all she has, she playfully teases him with sexual advances and laughs as her beau plays around with the three horrified teachers. But she cannot be reasoned with either and she also knows how to use a gun. This was one of only a few films Manning was in and based on this performance, she could have and should have gone on to bigger and better things.

Director James Landis tells the story in real time and keeps you in a tight grip of suspense throughout the film’s 92-minute running time. In one scene, Hall, Jr. threatens one of the teachers with death. He tells him that after he’s done drinking his soda, it will be his time to die. In short, an innocent soda pop bottle is used as a terror weapon. Landis also uses weird angles and fast cutting to emphasize the terror going on in the abandoned junkyard where the story takes place. Credit must also be given to Zsigmond’s very stark black and white cinematography which captures the essence of a setting where there is no hope.

Mention must also be given to the three actors who play the teachers, Don Russell, Richard Alden and Helen Hovey (in her only film appearance). Only out to have a good time, they play the victims as convincingly as possible. But it’s Arch Hall, Jr. and Marilyn Manning who make the biggest impressions here. This is a couple you do not want to pick up on the road. Their roles are said to be inspired by the real life murder spree of Charles Starkweather and his girlfriend Carol Ann Fugate which made headlines a few years prior to the making of the film. They definitely make one scary couple.

Now, we move on to “The Thrill Killers” (1964) which gives you not one, not two, but four psycho killers on the loose. It’s directed by Ray Dennis Steckler, the man who directed “Wild Guitar” and also gave the world “The Incredibly Strange Creatures Who Stopped Living And Became Mixed Up Zombies” (1963, an unfortunate MST3K target), “Rat Pfink a Boo Boo” (1965) and “Blood Shack” (1971), among many others. He was known for having an eccentric style of directing and it’s on full display here in 74 minutes.

The movie opens with an out of work actor roaming the streets of Hollywood. He has a beautiful wife (Liz Renay) who wants him to get out of the acting business. The opening narration says he’s “caught in the world of non-reality.” Then, we dissolve to a businessman saying goodbye to his family and driving down a lonely road. He stops to pick up a hitch-hiker. Big mistake. The hiker in question is Mad Dog Click (Steckler as Cash Flag) who promptly takes out a gun and shoots the businessman in cold blood. Click leaves the man’s corpse on the side of the road and steals his car. 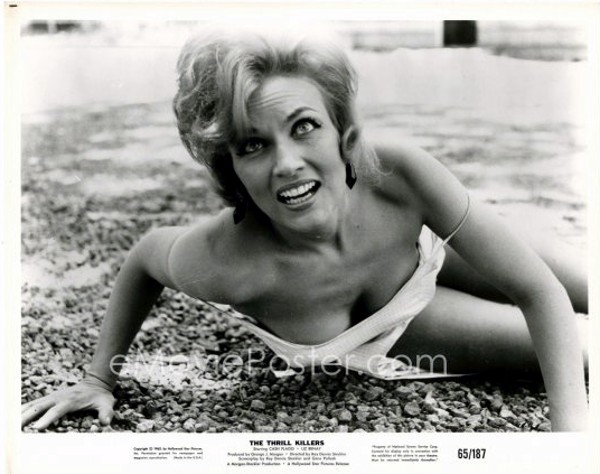 Soon thereafter, Click takes a prostitute to a hotel room and stabs her to death. This is handled in a bravura sequence where he backs his victim into a corner as the motel lights flash on and off outside. Then, a report comes on the radio that three more killers have escaped from a psycho ward. These three harass and kill a married couple who have come to see a house for sale. This is another great sequence which uses a lot of fast edits and tilt shots.

Eventually we find that Mad Dog Click is related to one of the three escaped mental patients. It all starts to boil when the thee descend on a diner where the actor, his wife and his producer, have stopped for a drink. Chases and killings soon break out and the whole thing climaxes with a chase between Click on horseback and a motorcycle cop.
The acting here by the entire cast is what can be expected. There are no real standout performances, but Steckler keeps everything moving at all times. He doesn’t so much build suspense like “The Sadist” does, but he’s more interested in set pieces that move like lightning. So when the chases do come, they come fast and furious and they keep you glued to your seat even as the crazy quilt of a plot unfolds. Steckler crams a lot into the film’s brief running time and he makes every minute count.

Again, the black and white photography must be taken into account. It’s credited to Joseph Mascelli, best known as the author of The American Cinematographer’s manual and it’s stark and crisp throughout. Anthony M. Lanza’s editing gives the film a further punch with its constant quick cuts in the action scenes.

So there you have it: two psycho-killer-on-the-loose pictures with different things to recommend them both. “The Sadist” and “The Thrill Killers” would make a terrific double feature, but they both stand on their own as highly entertaining B-movie classics. If you haven’t seen them before, check them out and enjoy the majesty of two psychotronic cinema icons: Ray Dennis Steckler and Arch Hall, Jr.