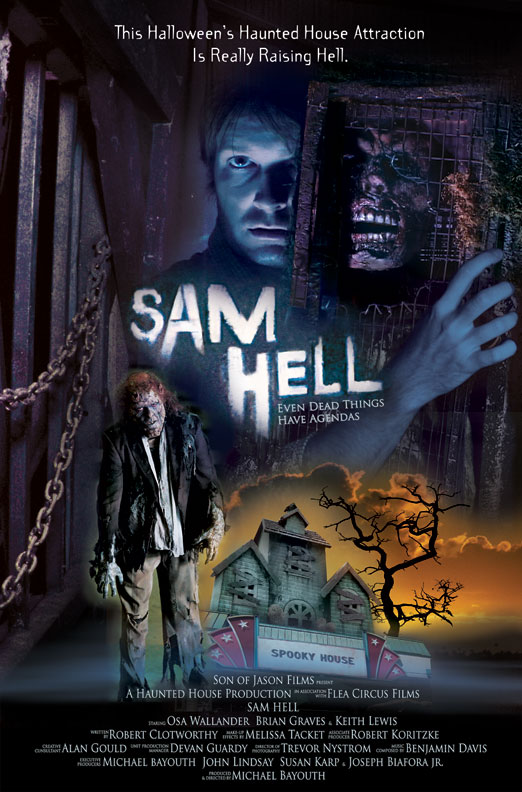 SYNOPSIS: It’s Halloween and this year’s haunted house has a deadly new attraction. Sean Taylor, foreman at the haunted house, buys what he thinks is a fake corpse head in a cage. But when his girlfriend, Jill, sees it, she says it smells and wants it gone. Little do either of them suspect that this pungent, rotting zombie is very real, very undead and is about to change their lives forever. When the corpse begins to telepathically communicate with him, Sean begins his descent into madness and the world of the paranormal. He goes on a murderous rampage, doing the cadavers bidding with a machete and a twisted grin. As the body count begins to rise, Jill discovers, with the help of a paranormal detective, that the caged ghoul has a nasty history as a serial killer and used to work at the very same haunted house.

Sam Hell provides the sound effects, smoky settings, editing, camera shots to make for an awesome classic 80s type horror film.  The eeriness of the film is accentuated by the disturbing voice of the relic when it talks to and instructs Sean (Brian Graves).   The characters gave a real sense of local college kids that we know or can relate to.  Especially Sean’s girlfriend Jill (Osa Wallander), who is the girl every guy wishes he went steady with, yes “steady,” as mentioned it has an 80s feel to it.

The haunted house setting is fun as you learn some behind the scenes of Halloween Haunted Houses. That helped set the film up as being a fun one to watch and it’s not long before the horror begins. The brutal moments in Sam Hell are decent because it uses just enough special effects and sounds to creep you out and leave the rest up to your imagination to make you cringe.

When Jill unintentionally discovers something about the relic, she immediately starts investigating the history of it. Her inquiring brings her to Alice (Kelly Madison) who is in an insane Asylum. Nurse Kelly (Maria Olsen) brings Jill to Alice.  As Nurse Kelly leads Jill to Alice in the basement, she gives Jill some history of Alice and the asylum.  Olsen does too good of a job as a creepy nurse to where you believe she should be a patient at the asylum.  As Jill continues, she’s lead to Mike Tillman (Keith Lewis) who knows more about Sam than anyone.

Mike ramps up the thrills and action as he goes on the warpath to help Jill. Sam already has directed his minions and they’re on the attack.  If Mike can’t stop Sam and the minions, the death toll with be vast.   The tension is built up and the intensity of the sounds, music, and little effects keeps you glued till the last moment.