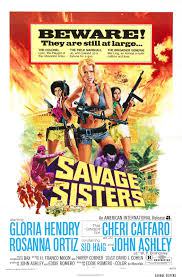 If you’ve seen at least one Filipino action film made in the 1970’s than you pretty much know what to expect with this but with all the sleazy aspects of the story this film seems to just fall short in terms of exploitation. Story takes place in a Banana Republic where two female revolutionaries are locked up but while in jail their group robs a General of $1 million dollars. Jo Turner (Cheri Caffaro) and Mai Ling (Rosanna Ortiz) are being prepared for torture by sleazy hooker turned sleazy cop Lynn Jackson (Gloria Hendry) but they get busted out to try and get the money back.

Jo and Mai learn that their revolutionary gang was murdered by a group led by a thug named Malavael (Sid Haig) and have stolen the one million and are now trying to find a way off the island. Lynn is told by her slimy boyfriend W.P. Billingsley (John Ashley) about the money and convinces everyone that they should steal it back with everyone getting equal shares but eventually he shows his dishonest side and the three women decide to do it on their own.

This is directed by Eddie Romero who has made and starred in practically every action film shot in the Phillipines during the 1970’s and even though he had to work with low budgets he became very adept at using whatever he had and producing some pretty entertaining films. Romero also directed “Black Mama, White Mama” and the ending to that film is almost exactly like the ending to this and I’m pretty sure it was shot at the same pier. This is an entertaining action film but I do think that it fails on an exploitation level and with the exception of maybe 3 nip slips this has no nudity to speak of. I’m not going to defend myself if called a sexist (because I don’t think that I am, not a big one anyway) but a big attraction to these low budget Filipino black action films is both the violence and the nudity. This film has scenes that offer hookers, brothels, female prisons, whip wielding S&M guards, Hendry in a bathtub, and a General who uses his fingers but with all this going on the film is noticeably careful not to show much skin. So okay, I was deeply disappointed by that but at the same time how can I not recommend a film that stars the beautiful and luscious Hendry (Live and Let Die) and Caffaro (Ginger) and let’s not forget Haig who yet again delivers one of his patented over the top sleazy performances. Not a great exploitation flick but a pretty entertaining actioneer that fits in well with the genre.