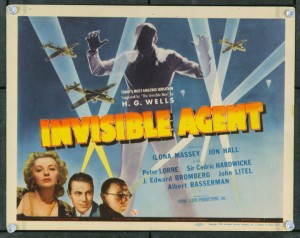 Invisible Agent has had a pretty low reputation for years amongst horror fans, but that is probably to do with the type of story on display here rather than the quality of the film itself. It’s a good, enjoyable adventure movie, a world away from H.G. Wells perhaps; but one only has to look at Universal’s identi-kit Mummy series to realise that can only be a good thing. This is a welcome change of pace from the usual formula.

Jon Hall plays Frank Griffin, Grandson of Claude Raines’ original Invisible Man (and like Lon Chaney Jr in The Wolfman about a foot taller than his progenitor!) Guardian of the secret formula for invisibility he’s approached first by the Nazis and then the Allies for aid in the war effort. Guess whom he chooses? In a quite startling opening sequence the head Nazi, played by Sir Cedric Hardwicke in his usual phoned-in style, prepares to use torture to get what he wants, ably aided by Peter Lorre’s sinister Japanese Baron, who wants to rid Griffin of several of his fingers…

Escaping and later Parachuting into Germany, Griffin, now invisible himself, stumbles on a plot to invade America. With the help of a double agent, the gorgeous Ilona Massey, he sets about turning the tables on Hitler’s henchmen.

It’s slightly curious that the film features both comic and genuinely sinister Nazis who commit torture, shoot people, break old men’s fingers etc. But the only real fault is the inclusion of a comedy dinner sequence where the Invisible One mocks J.Edward Bromberg’s attempts to woo Massey during a cosy meal for two. It goes on much too long and isn’t funny at all.

That aside, this is a rewarding and entertaining sci-fi spy thriller, which builds to a rousing climax and is graced by John P Fulton’s engaging special effects and the ever brilliant Lorre, possibly the only Hungarian who could convincingly play Japanese. A unique, immensely talented, and fascinating actor; Invisible Agent is worth seeing for him alone.