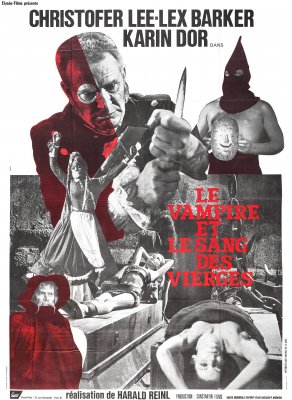 It is fortuitous that this film has at last reached the light of day again, (via DVD) since it provides a welcome reminder of the type of Saturday matinée “scary” fare 1960s parents could safely drop the youngsters off to see–in some ways similar to 1962’s “The Magic Sword.”

Boasting a very “Siegfried” style hero in Lex Barker, a particularly comely brunette heroine, and Christopher Lee at his most cadaverously malevolent, horror fans should not be disappointed in the regulation personalities. Nor will they be disappointed in the abundance of Gothic contrivances: snakes, skulls, potions, glass coffins, razor pendulums etc. etc. And to those with questions about the logic of the narrative, don’t bother with them–the rapid fire pacing won’t wait for you to find an answer anyway–if nothing else this film does move!

Ultimately, however, it is in the visuals that this film most impresses. Production design and color are of a very high order indeed, ranking very favorably against Jack Asher and Mario Bava, and it is impossible to believe that the previous work of these two gentlemen is not deliberately evoked here.

Much could be observed in this connection, but suffice it to say that rarely has a nocturnal forest been presented more balefully, with gnarled trees juxtaposed against an ultramarine sky.

Even more in its favor is the effective use of a medieval Bavarian town, whose quaint architecture seems right out of E.T.A. Hoffmann. Here is an example of location shooting that counts for something! Overall, although the credits credit Edgar Allan Poe as the basis of the story, the piece feels altogether more like a “penny-dreadful” hybrid pastiche of the aforementioned Hoffmann and Ludwig Tieck.