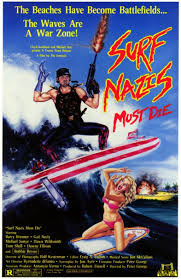 In comparison to many of its low budget contemporaries, the writing in SNMD is positively Shakespearian. The film has some semblance of a plot, the jokes are actually funny and the action is well paced. Most surprisingly, the film has a bizarre feel-good quality, which could almost be described as wholesome (if you look past the violence, sex and foul language). This is largely due to film’s sympathetic heroine, the awesome Eleanor Washington, who vows to single-handedly take out the members of an evil beach gang (the titular “surf Nazis”) after they kill her beloved son.

In addition to Eleanor, the film’s minor characters also have a lot to offer. Smeg’s relationship with his mother is hilarious and the surf Nazis are wonderfully tasteless, with members being named after Nazi “luminaries”. The director makes several very obvious references to A Clockwork Orange, but despite their eye make-up and swastikas, these gang members are about as chilling as the Goonies.

The inevitable bloodshed is rather low key and the gore effects are simplistic at best. However, the innovative use of hooks and speedboats more than makes up for any lack of carnage. Unlike many zero budget action films, SNMD does not rely on blood splatter or gratuitous sex to pass the time – which under normal circumstances I would consider to be a huge failing. However, SNMD is generally in such poor taste and overflows with sardonic humour to the point where the film becomes utterly irresistible.

Surf Nazis Must Die is a brilliantly conceived beach holocaust drama/revenge thriller that you can enjoy with the entire family. Forget about the low IMDb rating and brace yourself for this evocative masterpiece.