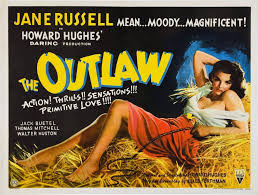 The classic Howard Hughes film which was censored and suppressed for years simply because of the ample cleavage of Jane Russell (if only those censors saw the films we have today…-grin- I’d pay to see *those* expressions;) it was completed in 1941, opened in *very* limited release in 1944 and then, finally, in wide release in 1949 (though still cut down).

This film is the film that catapulted Jane Russell into stardom…the film that Howard Hughes invented the bra for (so that he could show off those breasts and get suppressed for his efforts;)..and a film that is anything but a stereotypical western. It lacks the fast pace and action packed, horse-chasing, bullet-riddled scenes that encompass most westerns of the time. Most of the cliches, both in dialogue and scene, aren’t apparent. And most of all it examines the interplay between characters, each character had character…no one-dimensional cowboys and outlaws here.

The dialogue is clever and often witty, the plot isn’t predictable or full of holes, and most of all there isn’t a proud, evil-fighting cowboy hero. In fact, the world is all grey, no black and white. The only other Western I can think of off the top of my head that paints a picture like that is High Noon (another absolute classic).

Walter Huston (Doc Holliday) does carry this film, however. He’s the strongest actor, and the real standout. Jack Buetel (Billy the Kid) is too cheezy and innocent for my liking…he’s the only real cliche in the film, and it’s just his lack of talent that causes it. Jane Russell is simmering, but she look sour most of the time, which is a bit much. If she smiled just once in a while it would really add a bit more character to her…Rio didn’t seem like a character that sulked too much.

Overall: a great watch, with a lot more to offer than the average western. It’s not steamy or graphic, think 40s censorship and not present day;) but Jane Russell is a sultry one. It’s not the greatest film, far from it, but some of the camerawork is brilliant (and obviously influenced by the arrival of film noir). Definitely worth seeing,