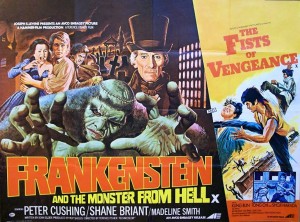 Hammer’s last Frankenstein outing is one of their best; despite the great sadness that went in its production (inherent in the film’s overall effect but thankfully not swamped by it), the film emerges as a pretty solid and well-crafted chiller with a remarkable Gothic flavor (all the more impressive for being made on such shoddy finances – the film allegedly carried one of the companies’ lowest-ever budgets!).

Script and direction keep the action of the plot moving, despite the necessarily cramped settings. Peter Cushing and Terence Fisher’s own personal state of minds create a poignant, almost elegiac ode to Gothic horror: this was to prove their final collaboration (indeed, it was Fisher’s very last film). The camera-work, James Bernard’s score and the production design all contribute to make this a true harking-back to the heyday of Hammer horror (in view of the fact that a lot of changes were effected during the early 70s with varying degrees of success); still, along with BLOOD FROM THE MUMMY’S TOMB (1971), DR. JEKYLL AND SISTER HYDE (1971), DEMONS OF THE MIND (1972) and CAPTAIN KRONOS – VAMPIRE HUNTER (1974), this is one of the last great Hammer films.

The Baron had evolved a great deal during his sixteen-year period at Hammer (producing seven films in all, only one of which did not feature Peter Cushing and only two were not helmed by Terence Fisher), reaching its zenith perhaps in FRANKENSTEIN MUST BE DESTROYED (1969) where virtually no trace of humanity could be detected in the character! This final venture finds him more relaxed (or, perhaps, I should say resigned) but certainly no saner or less involved with his obsessive quest to achieve immortality!! The rest of the cast is equally admirable: Shane Briant, one of Hammer’s bright young hopefuls, building upon his achievements in both DEMONS OF THE MIND and CAPTAIN KRONOS – VAMPIRE HUNTER; Madeleine Smith graces the screen with her presence, managing to give her character (an abused mute inmate) an inner strength and compassion that would normally be difficult to communicate without words; Dave Prowse’s monster is a memorably designed hulk (somewhat overdone in the style of Fredric March’s Hyde persona in the 1931 version of DR. JEKYLL AND MR. HYDE) but who unreservedly elicits the audience’s sympathy because, saddled with numerous body parts that do not belong to him, he is forced to go on living when his sole desire (possessing an ugly interior as well as exterior) was to end it all!; a few supporting characters are allowed to shine as well, notably Patrick Troughton, John Stratton and Bernard Lee.