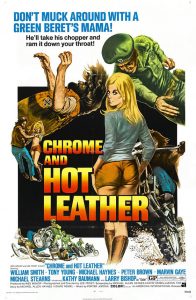 Lee Frost was a capable and half-way decent director and cinematographer, I guess. He has a catalog of work from the 60s and 70s, such titles (and such titles I’ve yet to see the movies of) that includes Zero in and Scream, Mondo Bizarro, Nazi Love Camp and The Black Gestapo. I don’t know if having such a catalog of work and a halfway decent eye as a DoP meant he made good movies. Probably not entirely the case. But Chrome and Hot Leather, aside from its hard-knock-awesome title, has a few things going for it. For one thing its star, the Lieutenant who returns from Vietnam to discover that his girlfriend was run off the road by a hothead member of a biker gang called the Beards (?), has a hard-jaw face and voice that’s like a knock-off of Sterling Hayden. It’s also got a likable-cum-sleazy cast of biker folk who get drunk, arm wrestle and sometimes have some group sex. Not that you see too much of it, of course, since it’s PG-13 (at least today, maybe it was G-rated back then, who knows).

But the few things going for it, which also, I should add, includes an absolutely hilarious climactic battle where the Lieutenant and his army buddies take a whole lot of ammo and bombs and bullets to the bikers just to, you know, scare them and get them loaded with gas that the ex-Vientam guys need gasmasks for (!), are not enough to make it something you should rush out to see. Even if you’re into trashy biker movies from the 60s and 70s, such as I am in that true-blue guilty pleasure kind of way, it’s something to see further down the pike, preferably on the double-bill I viewed it with, the Mini-Skirt Mob. It’s got a plot that’s got enough meat on it to keep things a little interesting, even as the acting is sewer-tastic and the final showdown between the Lieutenant and the (accidental?) killer of his girlfriend is underwhelming to say the least. But, yet, Lee Frost puts in little moments, like one particular line by a biker in a bar about harassing someone, and seeing how the soldiers hilariously train on their newly purchased Kawasakis. You’d think they were getting ready for a reenactment of the video-game Excitebike as opposed to seeking vengeance on a bunch of dopes.