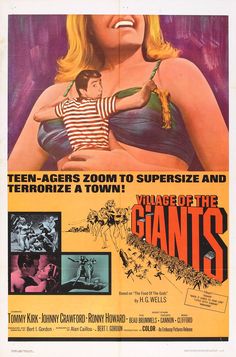 Bert I. Gordon’s “Village of the Giants” is a humorously poor version of the “big thing make boom” movies in which a small group (Maybe 6, hardly a full village) of teens take a formula that makes them grow really big, talk really slow, and move like they are dying one breath at a time. It’s all rather silly, and quite funny if you’re up for this kind of movie. Of course, it’s not funny in the way Gordon intended. Was it ever?

Tommy Kirk, also of the classic “Mars Needs Women” is fooling around with his lady friend in the start of the film, when Ronny Howard (Still with a full head o’ hair, and answering to the modest name “Genius”) creates a formula that makes things grow. When the no-good drifter teens get their hands on it, they cause some real trouble, and it’s up to Tommy and Ronny to stop the chaosy.

The best scene is the first in which the teens appear before the town. They show up at an outdoor barbecue, and everyone is afraid, but really, not so afraid that they run away or anything, they just kind of look up and gasp a lot. So then the giants are making threats, and Tommy, in a fit of rage and large hair, picks up a chair (That just happened to be sitting around outside in a park) and breaks it over the giants legs (They pretend, use your imagination). He goes “Ow!” and then backfists Tommy who gets whalloped. Very nicely done.

The whole film takes place in a vacuum. No one seems to be much surprised or worried by the giants ducks that show up out of nowhere in the Whiskey A Go-Go and start dancing. They just kind of go along with it. Nor is anyone interested in calling the government in when the teens take over the town. They just sort of go with it. And really when these giants move as slow as they do, why would anyone be afraid of them? You can always outrun them, or if they try something, take two steps to the left. Bert I. Gordon, if you’ll pardon the expression, just wasn’t thinking “big” enough in this movie to really deal with the consequences of his ideas. The end is so banal and rather anti-climactic, especially for what is essentially a monster movie.

All in all, “Village of the Giants” is low on logic, but high on some good laughs, most at its expense.