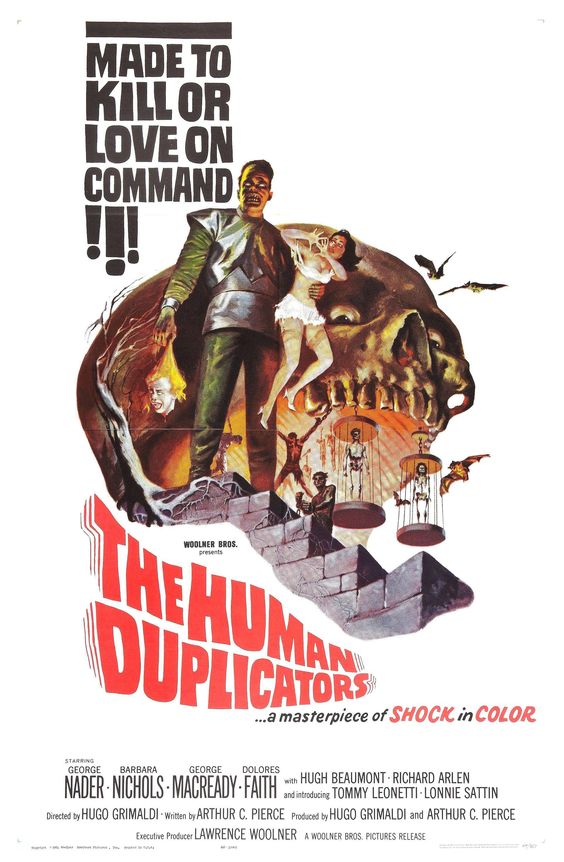 When a film’s best special effect is the casting of a 7 foot tall giant (with a thick, inexpressive voice) as the main villain, the film is in trouble. And when the film’s best actor is Hugh Beaumont, and it wastes him in a small supporting role, it has no choice but a destiny for eternal “B” movie status.

Still “Human Duplicators” isn’t really a “bad” movie. It’s just kind of under-powered and under-budgeted. And compared to toxic wastes of film like “Pod People”, “Beast Of Yucca Flats” or “Cave Dwellers”, “Human Duplicators” is like spending an afternoon at the Louvre. It’s typical of many of the movies that “Mystery Science Theater 3000” riffed on in Season 5 and 6 – mediocre, cheesy, 2nd rate, but presentable and at least mildly entertaining.

Give the film creators credit for trying to put a novel spin on the old “Invasion Of The Body Snatchers”/”Colossus” themes by incorporating Cold War paranoia with the concept of a ‘fifth column’ of android impersonators. They took Kiel’s stiff, inexpressive persona and tried to work with it by framing him as an cold, impassive alien and having all the actors playing the “android replacements” act the same way. (It’s high school level theater technique of course, but at least it’s a deliberate choice). They set most of the proceedings in and on the grounds of an elaborate old mansion (complete with secret passage and a dungeon) and loaded the sets with all the elaborate bric-a-brac, flocked wallpaper and ornate furniture they could stuff in it to keep the settings visually interesting. They tried to work in some 007 style suaveness and romance with a smug,smarmy hero (who actually seems to have some brains) and his Girl Friday type. There’s even a fairly hot “blind” brunette running around the mansion and she’s pleasant to look at (once you get past her clown outfits).

The trouble is, of course, that none of this is enough. You can’t pull off romantic scenes and witty war-between-the-sexes by-play when the Girl Friday has a nasal Jersey voice that hits the viewer like nails on a chalkboard. Kiel tries hard, but he doesn’t have any charisma to back up his startling size and his lines sound like they’ve been wrung out of a wash cloth. The way the scenes are shot inside the mansion are dull and interesting – as Joel remarks in the MST coverage, “it’s like a slow motion British bedroom farce” only without the humor, or the sex, or the comic timing. Most of the special effects are silly and unconvincing , especially in the “climactic” battle at the end of the movie where Kiel does battle with a bunch of android duplicates while the hero shines a “pulse lah-zer” on them to screw up their mechanical brains. The deus-ex-machina, er, sorry, “pulse lah-zer” looks like a Klieg light on wheels…you can tell that they just didn’t have room in the budget or time in the schedule to make something credible looking or stage its use in a compelling way.

Still, it’s more professional looking and less cheesy than anything from the Corman factory or from Ed Wood, Larry Buchanan or Herschel Gordon Lewis. You could put this on during a ‘science fiction’ themed evening of movie watching and get a nostalgic chuckle out of it before you went on to the “hard stuff” with Boris Karloff and Lon Chaney. In spite of my complaints, no one involved with “Human Duplicators” has anything to be overly ashamed of. (As far as I know!)