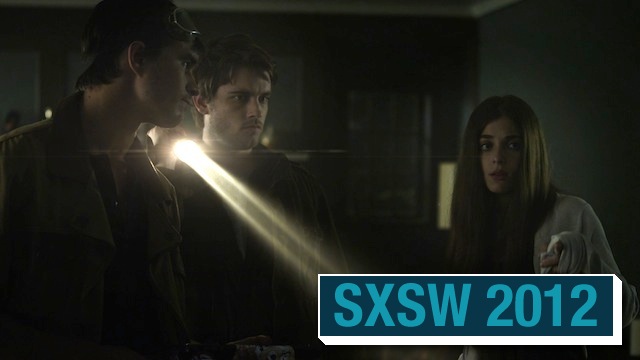 Even with its relatively limited resources, John Dies at the End creates a bigger and more involving world than most films with over 20 times its budget. This is one crazy world filled with even crazier characters. Writer/director Don Coscarelli‘s adaptation isn’t a lick afraid of silliness, and that is John Dies at the End‘s key charm.

To describe everything that goes down in John Dies at the End would be a massive and confusing chore. In short: there’s a lot. From alternate universes to a meat monster, it’s got plenty going on. The two leads, young and good-looking twenty somethings Dave (Chase Williamson) and his buddy John (Rob Mayes), take a drug known on the streests as “soy sauce,” and it’s the kind of drug that opens one’s eyes in ways unimaginable. The pair get into some oddball situations, involving the likes of Paul Giamatti and Clancy Brown.

While it’s always exciting to see both Giamatti and Brown having fun, there’s a specific problem that arises when both appear on-screen. For one, the film makes you wish Clancy Brown and Paul Giammati were playing Dave and John. Williamson and Mayes are funny at times, but having them matched against Giamatti and Brown isn’t the best idea. Brown acts all-out ridiculous, while Giamatti plays it straight as an expository device, albeit a good one. Who wouldn’t want to see a straight-faced journalist, played by Giamatti, and a wacky psychic/spiritualist, played by Brown, team up to battle the supernatural versus two plain kids? Well, everyone reading this, of course.

As previously hinted, John Dies at the End is a film that goes on many tangents. The structure’s a mess, but it fits the characters and this world. There’s very few aspects of John Dies at the End you could label as conventional. The somewhat episodic flow will throw off some viewers, and it’s unquestionably jarring. The first act is John and Dave working as low-rent Ghostbusters, the second act is stuffed with exposition, and the third act is set in another universe. Again, sloppy, but so is what the characters are experiencing. When we first see them discover all these slimy and grotesque things, it’s a blast. We get a new dirty and funny world we’ve never really seen before, at least not lately. I won’t spoil all the imaginatively goofier encounters John and Dave face, but about every one of them makes for something new and energetic.

The highest compliment I can pay to John Dies at the End is, once the credits roll, you’re left wanting more of this world. Don Coscarelli gives us tons of ideas, effects, and jokes to have fun with, but there’s plenty left to explore. Anyone who embraces the oddness of John Dies at the End will leave the theater with the same sentiment, along with a smile on their face.

The Upside: Paul Giamatti’s use of the word “shit”; Clancy Brown’s accent; the cool, dirty, and silly vibe; the world-building; a handful of easily quotable lines; leaves you wanting a sequel; John and Dave are a decent enough duo.

The Downside: John and Dave are nothing more than a decent enough duo; the third act loses some steam; iffy green screen work.

On the Side: Has a movie ever featured a doornob penis? ‘Cause this movie’s got one.