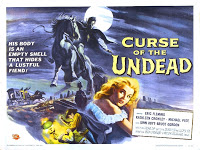 Curse Of The Undead” was released in a very interesting period in horror history. Hammer was on the verge of creating new horror and Universal was trying to stay in the game. Since westerns were popular at this time, the powers-that-be decided to give the western a twist: make the bad guy a REAL bad guy. Meet Drake Robey (Michael Pate), a gunslinger in black. Since his arrival, there has been some mysterious deaths involving young girls. Dr. Carter(John Hoyt)tells the local minister, Dan Young (Eric Fleming) about his suspicions, including the marks on the neck. Soon, the good doctor winds up dead. Thinking that the local bully/Land Baron Buffer (Bruce Gordon)was responsible, the doctor’s hot headed son Tim (Jim Murphy)tries to kill Buffer, but ends up dead. Soon, Dolores (Kathleen Crowley)is putting up signs for a gun-for-hire to finish off Buffer. Robey comes into the picture and has more than a friendly interest in Dolores, and Dan begins to suspect Robey’s involvement in the deaths in town.

What’s interesting about this film, other than one of the first blends of westerns and vampires (It would be years before “Billy The Kid Vs. Dracula.”).,is the use of a little known vampire myth. According to myth, a person can become a vampire if they’ve committed suicide. When Dan finds the diary of Robey’s father, he finds out that Robey killed his own brother and himself out of grief, thereby cursing him into an undead existence.

The ending is just as interesting: Robey challenges the preacher to a gunfight. Since vampires are impervious to bullets, you have a feeling who is going to win. In a typical twist, good triumphs over evil.