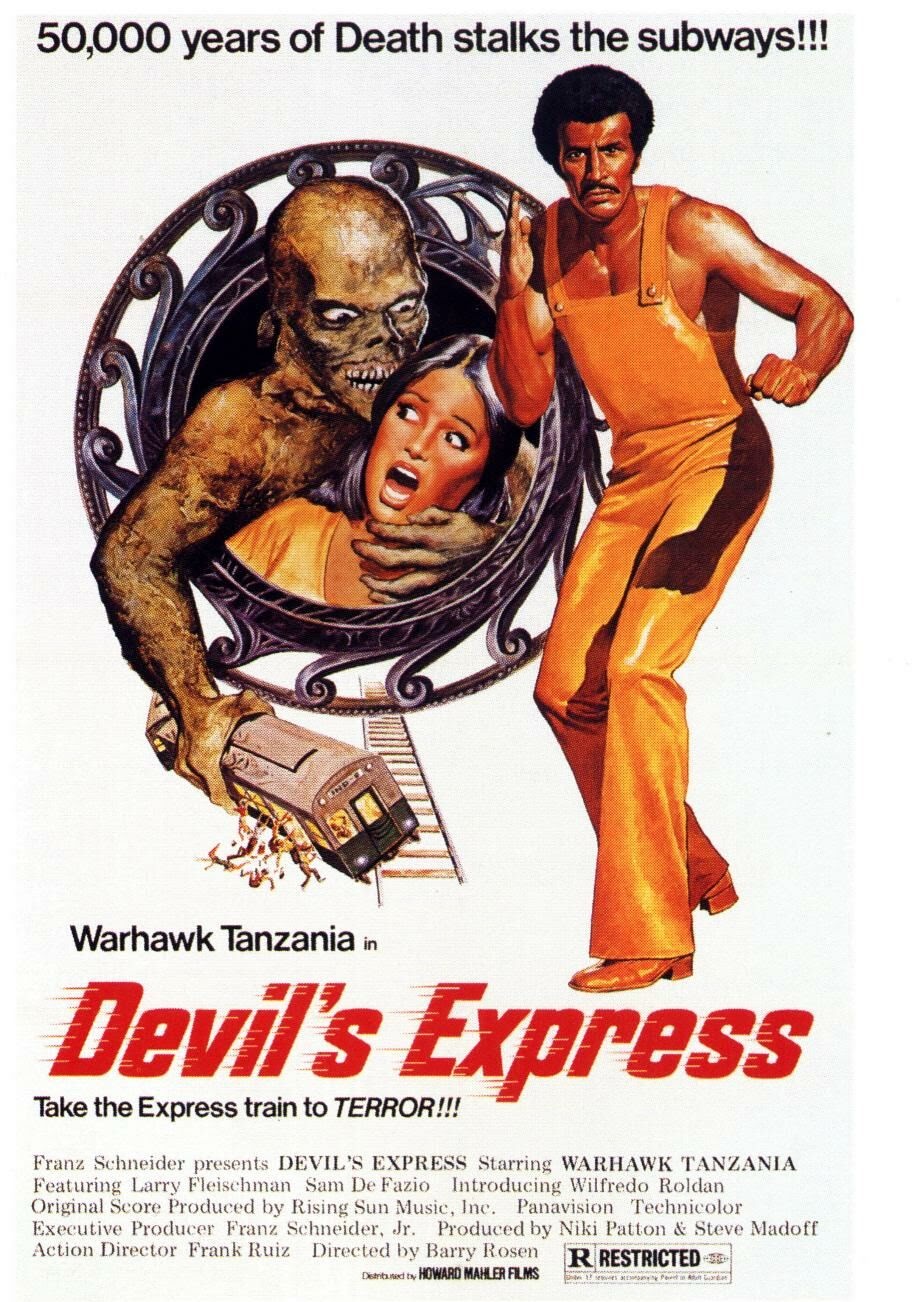 The only known film in which a would be rapist is dragged into the New York subway system by a Chinese monster who has inadvertently contributed to a race war in the big apple- ‘Gang Wars: Devil’s Express’ was distributed stateside by Howard Mahler Films a small time outfit known for euro pick-ups like Killer Snakes and The Hatchet Murders (Deep Red). Rodan (Wilfredo Roldan) the films Ratso Rizzo is a slimy, hate filled Times Square con-man primarily responsible for instigating violence between street gangs The Black Spades and The Red Dragons (hence gang wars). His friend/kung-fu master See-Fu ‘Luke’ Curtis (Warhawk Tanzania) recommends ‘a week of improvement for the body and soul’ in a Hong Kong kung-fu school if only to keep this drug dealing hothead out of trouble. However in Hong Kong (looking suspiciously like ‘Hong Kong’- central park) Rodan accidently releases an ancient Chinese monster who had been imprisoned there in 200bc by a bunch of Buddhist monks. The monster follows the duo back on a one-way ticket to New York, murdering and taking over the body of a Chinese businessman before hiding away on a boat. In an implausible but highly amusing twist the zombie chinaman that emerges from the boat is somehow unnoticed on the streets of New York despite having ping-pong ball eyes. The hustle and bustle of NYC proves too much for this zombie monster who hides in the subway- where for the rest of the movie it lures people to their deaths- enjoying such pastimes as pulling a night-watchman’s head off. One of many snuffed out is David Durston (director of I Drink Your Blood and many hard-X ‘all male cast’ movies) who ends up on the tracks after the monster puts on a woman’s voice ‘please help me! its dark in here!’ Rodan’s luck runs out too as he and a friend are ambushed by the ‘tong’ who beat the friend to a bloody pulp and chase Rodan onto the subway tracks where the monster finishes him off -frying his head in a fuse-box. A broken, angry man See-fu takes on the Red Dragons before learning the dreaded truth ‘in my mind what you are telling me sounds fantastic, but in my heart i know your telling the truth’. Dressed in an all-in-one gold suit that if nothing else will cause the monster to laugh itself to death, See-Fu heads into the 135th street subway to fight the monster- who disguises itself as members of the cast (and a train) before revealing its trueself as well as the most phoniest monster suit outside of a Larry Buchanan movie. As its multiple titles attest Gang Wars: Devil’s Express is revolving parts horror, intercity action and ‘blaxploitation’ film. Such eclecticism (the work of five writers!) guarantees that Gang Wars never lacks incident whether its several kung- fu fights wherein kicks and punches miss there mark by a mile or the monster spilling its guts on the traintracks. Ultimately though such opportunistic cross marketing only emphasizes the extreme poverty of its skidrow filmmakers- its hard to convey how amateur hour Gang Wars actually is. Technically its a rock bottom catalogue of horrors- bad editing, scenes shot without sound and a dreadful soul song `That’s why you and I believe (in each other)’ that appears to have been recorded with the microphone in a bucket of water. Such hopelessness should never have the right to be as entertaining as it is here- but against the odds Gang Wars remains just that from beginning to end. Ironically one of the film’s most distinctive features also stems from its zero budget roots, albeit almost accidentally. Too cheap for studios, Writer/Director Barry Rosen lets the action play out in some of the most run down, urban places imaginable embossing the film with a genuine sense of street realism somewhat lacking in meddling Chinese monsters and hack dialogue like ‘they’d rather fight a gorilla in a phonebooth than mess with us’. The film’s star Warhawk Tanzania with his big Afro and disco-era threads at least looks the part of a poor mans Xeroxed blaxploitation hero- but that’s about it. As a character See-Fu is sketched out as streetwise, self assertive and righteous but after Warhawk’s ham fisted approach to dialogue hes reduced to an arrogant old complainer ‘the next time, the next time you try to recruit me into that pigpen of yours is the time i ice you’. Warhawk also secured acting roles for several of his relatives in the production- witness Tamu Tanzania and ‘special guest star’ Tsikagi- Iron Priest- Tanzania (!) but true scene stealers here are the nasty old baglady who abuses and spits at passengers on the express before discovering a headless torso and Brother Theodore’s street preacher ‘Moses is dead, Mohammed is dead, Buddha is dead and I’m not feeling so hot myself’. Barry Rosen had one more exploitation film in his system, a softcore sex film called The Yum Yum Girls starring sometime Charlie’s Angel Tanya Roberts before resurfacing as a successful television producer- Warhawk Tanzania (and relations) have never been heard from again.