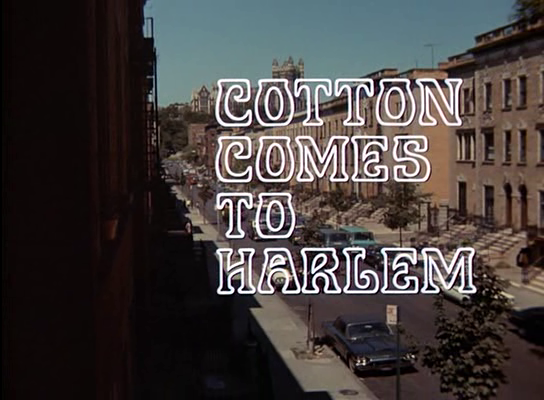 Ossie Davis makes his directorial debut a smashing success in the trend-setting action crime comedy Cotton Comes To Harlem. Coffin Ed (Raymond St. Jacques) and Grave Digger Jones (Godfrey Cambridge), two plainclothesmen on the Harlem detail, are assigned to investigate the goings-on of suspicious local preacher Deke O’Malley (Calvin Lockhart), whose “Back to Africa” political movement turns out to be a scam to bilk the community of their hard-earned cash, with the scam-money hidden in a bale of cotton.

One of the most energetic, entertaining and humorous action comedy efforts to ever hit the big screen, if Cotton Comes to Harlem isn’t black enough for you, you may find yourself in serious need to reevaluate your standards. Based on Chester Himes’ novel of the same name, actors Godfrey Cambridge and Raymond St. Jacques bring the respective characters of Gravedigger Jones and Coffin Ed Johnson to life with a vivid, edgy sense of humor essential to effectiveness of the film. As a pair of mercurial police detectives who stumble upon a lucrative scam while investigating a hold-up, Cambridge and St. Jacques maintain a convincing chemistry that makes the film work simultaneously as an effective comedy and a white-knuckled thriller. Add to this chemistry some sharp, witty dialogue and a skilled sense of upbeat pacing and you have all the ingredients for a remarkably entertaining film that also manages to make some poignant observations regarding the state of inner city unity at the time. Few films during this era, “blaxploitation” or otherwise, managed to capture the skillful balance of laughs and gasps as Cotton Comes to Harlem. Under the sure hand of actor-turned-director Ossie Davis, this oft-neglected buddy cop classic served as an ideal prototype to later, similar minded films that would ultimately overshadow Cotton and leave it relegated to curious obscurity. Without this film serving as a blueprint, such popular later efforts as Lethal Weapon (1987) and Bad Boys (1995) may not have enjoyed success that made them as wildly popular as they would ultimately become. And While Cotton may have indeed been the spark that ignited a trend of similarly minded films throughout the 1970s, few possessed the solid background or remarkable talents to make them work nearly as well. Cambridge and St. Jacques would again pair-up two-years-later for the entertaining sequel Come Back, Charleston Blue.