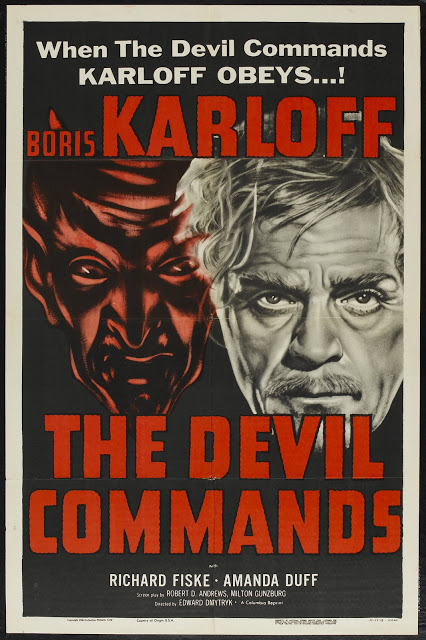 Corny and cliche’d as The Devil Commands may look to the superficial gaze, it’s a powerful expression of the inextinguishable and far from trivial human wish to believe that death is not the end and that the dead we loved are not forever lost to us. Karloff starred in a whole sub-genre of films on this theme from the middle 1930s to the early 1940s (cf The Invisible Ray, Before I Hang, The Man They Could Not Hang, etc), invariably as a misunderstood scientific genius, embittered by tragedy or injustice, whose desire to conquer death clashes fatally with the prerogatives of the Almighty.

Whether one believes in an afterlife or not, it would be a coarsely reductionist mind that could consider the subject ridiculous. What gives these films (and this one in particular) their eerily modernist slant on the matter lies in the way they reflect the public’s awe of science in the first half of the twentieth century, when astonishing developments such as radio and television (and that weird form of immortality, the motion picture), made it seem believable that technology might solve the supernatural as well as the physical mysteries. It is worth remembering in this context that the contemporary electrical wizards Thomas Edison and Nikola Tesla, classical Mad Scientists both, attempted to build machines with which to talk to the dead.

In this morbidly obsessive cinematic byway The Devil Commands stands out as one of the most insidiously poignant and nearly blasphemous films of its kind, sailing very close to the emotional and spiritual wind in its depiction of Karloff’s bizarre attempts to communicate with his dead wife. As a mad-scientist entertainment it contains some of the most magnificently deranged laboratory scenes ever filmed, surpassed in this context only by James Whale’s Frankenstein and Bride Of Frankenstein. I still succumb to its mournful fascination. And if your first viewing doesn’t scare you half to death, you can’t be more than half alive.