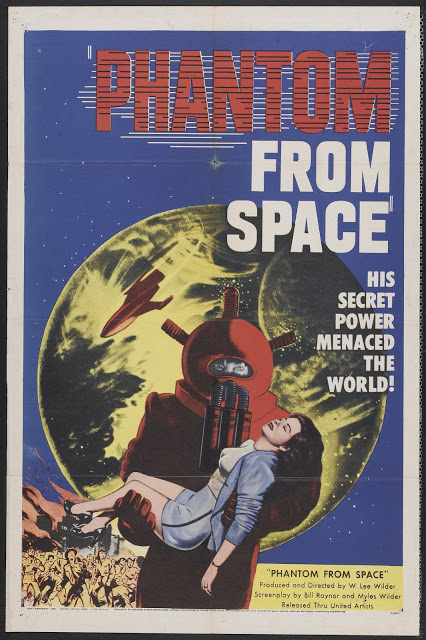 Early 1950’s man from space movie where in this case, it’s the spaceman thats in trouble not the earthmen and women. A UFO is tracked from Point Barrow Alaska entering the earth’s atmosphere traveling at some 5,000 MPH as it heads south some 3,000 miles down the Pacific coast it loses speed and crashes in the ocean off Santa Monica Calif.

The local police are alerted when all the electricity around Santa Monica gets blacked-out and a number of people are found dead; one on the beach and another, a night watchman, outside an oil field that was set on fire. It turns out that the person responsible for all this is the spaceman, who ejected from the spacecraft before it crashed, and only killed in self-defense when he thought that he was being threatened by the people in the area. A local man-hunt is on to find the killer who sheds his space outfit and turns out to be invisible but he also finds it difficult to breath the air in the earth’s atmosphere. The spaceman has to get back to the local observatory where his suit and helmet are to put on in order to stay alive.

Slowing suffocating the alien tries to make contact with the earthmen, with some kind of Morse Code, but to no avail. With the scientists and police trying to make contact and show the spaceman that they mean no harm a local reporter takes a photo of the alien which has it drop it’s life saving helmet, due to the camera flash that excited it, and it breaks.

With that the last hope to stay alive for the spaceman is gone and as he runs up to the top of the observatory, chased by the earthmen, he starts to become visible as he slowly loses his ability to breath and dies. Even though the special effects in the movie “Phatom from Space” are of the bargain basement variety the very interesting and imaginative story more then makes up for them. We see in the film that it’s the alien thats the victim of the earth’s environment not the earthlings being threatened by the alien’s advance technology.

The space alien didn’t want to do the people of earth any harm, all he wanted to do was get back home to his planet,but it was the earth’s atmosphere like in the movie “War of the Worlds” that in the end killed him.