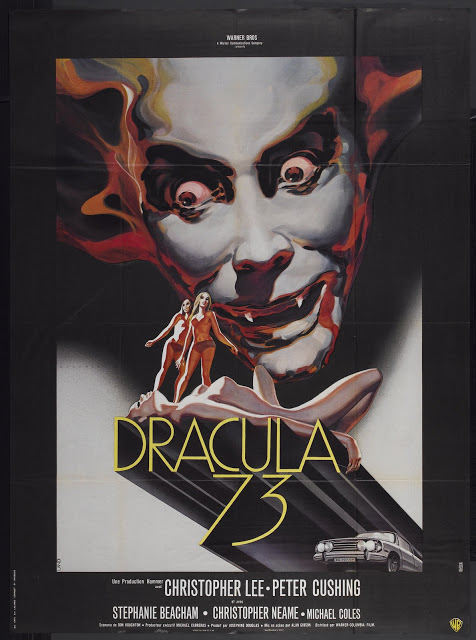 The idea of bringing Dracula to contemporary times isn’t bad–after all, it might revive the series a bit by injecting a new story element into a series that Hammer has all but exhausted in a long series of generally excellent movies. However, because the present day turned out to be the crappy early 1970s, the results were pretty silly and looked more like LOVE AT FIRST BITE (a deliberate comedy). Seeing Christopher Lee in a film filled with 70s hip lingo and electric guitar chords and laughable rock music just seemed beyond stupid. To make matters worse, the acting is much more over-the-top here–with an intense and silly performance by “Johnny Alucard”. I also thought it was really funny that it took Van Helsing’s grandson to notice that “Alucard” is “Dracula” spelled backwards–no one else figured this out for themselves! Wow, what cunning!!

So because so much of the movie was bad, why did it still earn an almost respectable score of 4? Well, when the story came to the expected showdown between Van Helsing (Peter Cushing) and Drac (Christopher Lee), it was exciting and ended very well. Additionally, and I know this will sound very sexist, but if I had to watch a bad film, at least Stephanie Beacham’s character wore some really nice outfits that revealed her ample….”talents”, so to speak. So at least it was a pretty film to watch.

By the way, the film ends with the phrase “may he rest in FINAL peace” at the end, though this was not the final Hammer Dracula film with Lee. He returned for “The Satanic Rites of Dracula” just a short time later and it was in many ways even worse than this dud of a monster film.