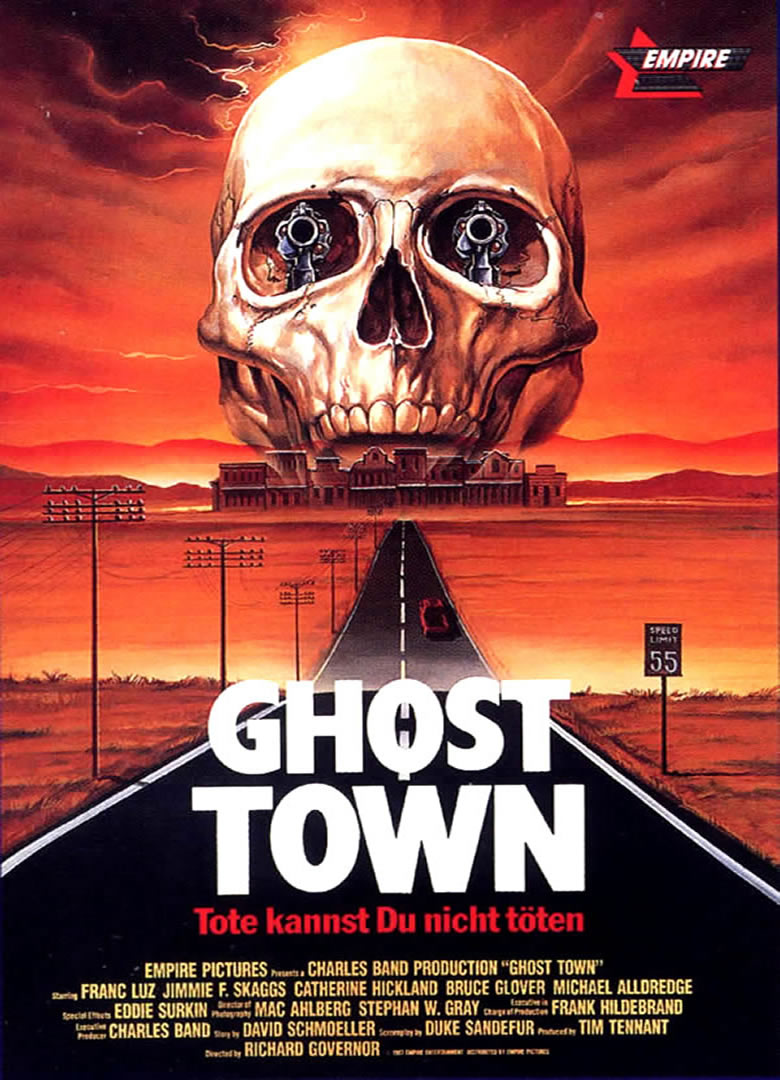 GHOST TOWN is a Charles Band production, but don’t let that turn you away. It’s not as cheapo-looking as some of his others. It reminded me a bit of ARMY OF DARKNESS, in that a modern day man is suddenly thrust back in time to a world he’s unfamiliar with, and must protect the citizens of that time against evil. It’s about a small town sheriff (Franc Luz) who tracks a missing girl (Catherine Hickland) to an old western town out in the desert. The town is haunted by the ghosts of both the townspeople and the villainous gunslinger and his men who used to terrorize them back in the Old West. The only way out is for the sheriff to find a way to kill the gunslinger, freeing the townspeoples’ ghosts from his control and allowing the town “to die.” The film blends elements of the horror and western genre nicely (scares on moment, high noon shootouts the next), and the sets are approriately spooky. There’s also very little gore (one man gets impaled), all the deaths are nearly bloodless, and there’s even hardly any swearing. The make-up for the villain isn’t anything incredible, but is effective, and, surprisingly for a low-budget late-80s movie, the acting is pretty good. Luz is an appealing hero. My only complaint is that, after the film wraps up, the very end is a too short and leaves you wondering if the final scene was originally longer and was cut down considerably. I would have also liked to known why Devlin (the bad guy) kidnapped the girl in the first place, though it’s sort of hinted that she resembles the saloon singer he was in love with back in the 1800s. But those are just minor complaints. If you haven’t seen this film, I suggest giving it a look if you can find it. It doesn’t appear to be available on-line anyway, so I’m afraid it’s only available as a rental, if the video stores even carry it. It’s not the greatest horror film ever made (though I don’t know if I’d really call it that, but that’s the section you’ll find it in), but it makes for good entertainment on a rainy night. Check it out. You may be surprised at how enjoyable it is.