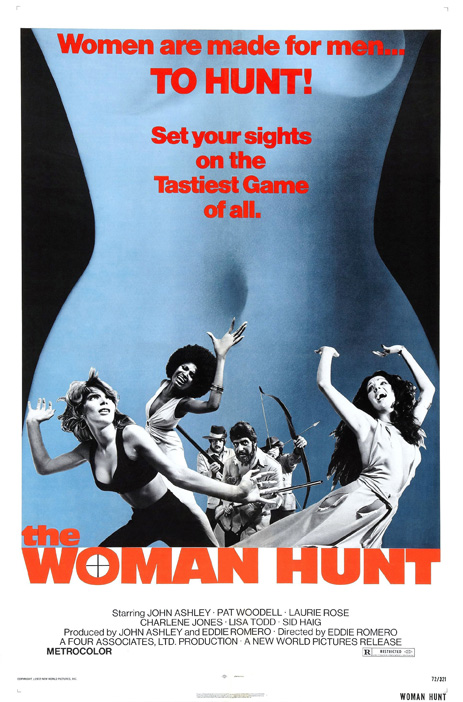 The Woman Hunt is yet another version of the often copied classic The Most Dangerous Game; only this time, the main focus is on sleaze rather than horror. The film was written by Jack Hill and directed by Eddie Romero – two of the people involved in bringing us sleaze classics such as The Big Doll House and The Big Bird Cage; so anyone that has seen those two will have some idea of what to expect from this one. Naturally, the film was made on a low budget and as such it all feels very cheap – they couldn’t afford good actors either, but apparently beautiful women don’t cost much…so that’s good. Naturally, the basis for the plot focuses around the idea of a bunch of women being captured; and then hunted down for sport. We focus on the group of mercenaries charged with rounding up the women needed (which are kidnapped to order). They hunt down the women and then take them back to their employers; a rich group of people that use the women as prostitutes for their rich clients.

The Woman Hunt clearly does take influence from The Most Dangerous Game; although it doesn’t completely rip it off and only the second half of the film is a real copy. The film is very uneven for much of the duration. Parts of it seem to be dubbed too, and the dubbing is really atrocious. The night shots are far too dark and at times I struggled to see what was going on. This also transcends to the plot, as the film is interesting in parts; and then rather boring in others, which really brings down the quality of the film. The only big name in the cast belongs to Sid Haig; and if anything he’s completely wasted – especially considering how much he stood out in Jack Hill’s pair of women in prison movies. The film is not very graphic either; although the version I saw ran for barely seventy five minutes, so there’s a good chance that it was cut. Even so, it could have been a lot sleazier which would have improved the whole film. Overall, I’d say this might be worth seeing for fans of grindhouse cinema…but it’s a long way from being a classic.