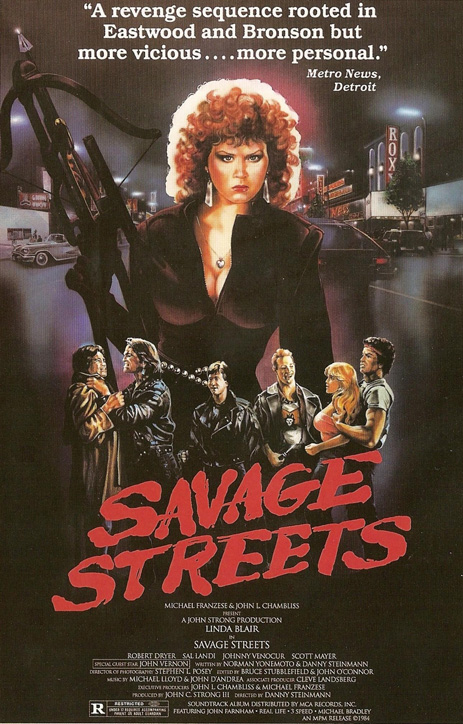 Linda Blair was at the height of her 80’s trash exploitation fame when she starred in this delectably down and dirty grindhouse sleaze howler as Brenda, an over-aged high school “bad girl” senior who’s the leader of the tough all-girl gang the Satins. Trouble rears its ugly head when the Satins run afoul of a brutish all-guy street gang called the Scars (led by pockmarked sneering Neanderthal Robert Dryer). These detestable no-count hoodlums not only viciously rape Brenda’s innocent deaf mute sister Heather (a very cute and endearing Linnea Quigley), but also toss Brenda’s pregnant best gal pal off a bridge to her death. Man, are these guys real nasty customers. But have no fear. After sitting in a bath tub topless and dragging on a cigarette while lost in deep thought, the spunky and resourceful Brenda decks herself out in a clingy skintight leather jumpsuit and breaks out both a crossbow and some bear traps with the specific intent of hunting down and killing the vile subhuman scum.