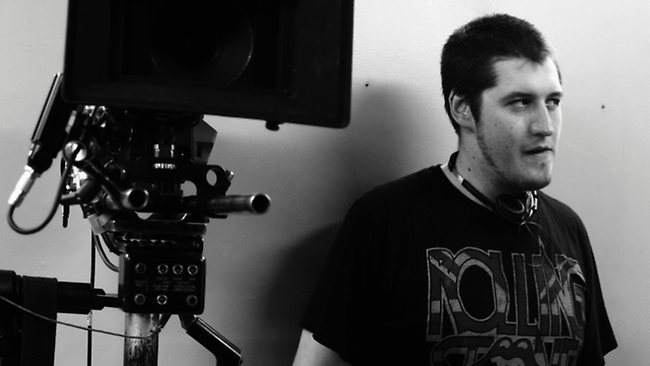 Growing up in Wales, Gareth Evans couldn’t wait for his father to go to the local video store every weekend and return home with a stack of martial arts action films starring the likes of Jackie Chan, Jet Li and Sammo Hung.

Now, some two decades later, the 31-year-old Evans has transformed himself into an Indonesia-based martial arts filmmaker. His second such action flick, “The Raid: Redemption,” which was produced for around $1 million, has been a critical darling on the festival circuit since it premiered last year at the Toronto International Film Festival. It opens both in the U.S. and Indonesia on Friday. (Above, you can watch an exclusive video narrated by Evans about the making of the movie’s “hole drop” scene.)

The film, perhaps best described as an edge-of-the-seat “Die Hard” with fists and feet of fury, showcases the Indonesian-style martial art of silat. The plot revolves around an elite special forces team rookie named Rama (Iko Uwais) who is trapped with other members of his force in a rundown, 15-story apartment building inhabited by a vicious crime lord and his equally ruthless cronies.

Silat has a lot in common with other martial arts such as kung fu and muay Thai, Evans said. “They tend to share similar movements,” he said. “But it’s the presentation of it. It is the packaging of how you go from A to B, which is what makes each of the martial arts feel different and unique.

“One of the things I really loved about silat is the fact it is so adaptable and so fluid in the way it moves. You can be fighting someone and then they can come down and take your legs from you. It’s all done in a blink of an eye. It can be adapted if you are in a wide open space or a confined space. There are around 200 different forms of silat. Each one is relevant to the culture of its village or sometimes influenced by animals. In this movie, we went for a universal silat.”

Tom Bernard, co-president of Sony Pictures Classics, which is distributing the movie in the U.S., called Evans a filmmaker to watch. “The action and the way he moves a story along … you blink your eyes and it’s over,” he said. “I haven’t seen a movie this exciting with this kind of action in years. He keeps the tension so tight that by the end of the movie, you get up and you realize you have broken into a sweat.”

Evans’ move from Wales to Indonesia was spurred by his wife. After getting a master’s degree in screenwriting in Wales, Evans made his first film, the low-budget thriller “Footsteps,” in 2006. Though it wasn’t released in Britain, it did get a DVD release Stateside. “That was a key moment for me,” he said. “Before that, I was doing my 9-to-5 job doing Web coding and making videos for people to learn Welsh.”

But after making “Footsteps,” he knew the only thing he wanted to do was direct more features. “But I had no idea how,” he said. “In the U.K., I didn’t push enough to get into the industry.”

Meanwhile, his Indonesian Japanese wife, “Raid” producer Maya Barack-Evans, couldn’t get work in Wales. So they decided to give Indonesia a try. His wife made some calls in the country and Evans soon got a job directing a documentary, “Land of Moving Shadows: The Mystic Arts of Indonesia, Pencak Silat.”

“It was the first time I had ever been introduced to silat,” said Evans. “I wanted to kind of show my friends in the U.K., but there were no films being made in Indonesia that showed it in its pure form.”

While he was making the documentary, he met his future star Uwais, a truck driver who was a student of silat. “We were filming his master,” Evans said. “He did a display demonstration. I was blown away. This guy can move.”

And the two have collaborated ever since. Uwais was the star and fight choreographer on Evans’ first martial arts film, “Merantau,” which was a hit in Indonesia and was sold internationally. For “The Raid,” Uwais did the choreography, along with Yayan Ruhian, who plays the villain Mad Dog.

Evans doesn’t believe that the film’s nonstop violence and bloodletting will turn off audiences. “It’s a violent movie,” he said. “But we are not being gratuitous or repulsive. We don’t linger on things. It is the equivalent of someone coming up and punching you in the stomach and running away.”