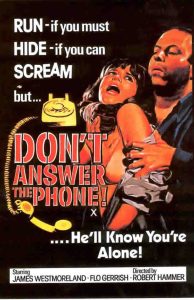 A film requiring little sensibility, Don’t Answer the Phone, joining Maniac (William Lustig, 1980), He Knows You’re Alone (Armand Mastroianni, 1980) and Nightmare (Roman Scavolini, 1982) where no mystery surrounds the killers identity, is one strong dose of offensive medicine. It can get quite harrowing, especially in scenes where the killer pours hot wax over a pleading naked victim.

After a sudden name change to cash in on the Don’t cycle (Don’t Ride on Late Night Trains, Don’t Look in the Basement, Don’t Open the Window, Don’t Go in the Woods, Don’t Go Near the Park, Don’t Go in the House…etc.) The Hollywood Strangler became Don’t Answer the Phone. Basically, an overweight ex-Vietnam vet, with a fixation for leather and weightlifting goes nuts and strangles girls in the Hollywood area. He also has some father issues and frequently rants aloud about his abusive old man. Killing women he believes are in need of a moral lesson, playing a cat and mouse game with an agony-aunt-type DJ after tuning into her radio station and screaming at himself in the mirror, this is one psychopath you won’t forget.

The lead performance by, Worth (Darkman, Dark Angel: The Accent…etc.) goes so OTT in his role as Kirk Smith it makes this film worth seeking out, although Don’t Answer the Phone certainly is not for all sensibilities. The sleaze-o-meter here runs very high, making the viewers feel as sweaty as the hulking killer himself. It doesn’t come as a surprise that such a film comes with its bad points. The direction is quite uneven, occasionally mixing bizarre humour with violence. The script can be considered quite inept, there’s the expected macho-cop buddies’ banter; it’s one of these awful lines concluding the film. After Worth has done his Michael Myers indestructible killing machine impression, he is shot repeatedly, falls in a pool and has the tough cop stating over the tinted red pool