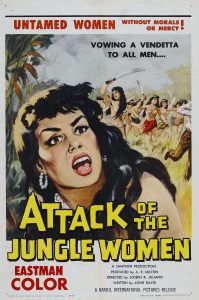 I really don’t know what these people were thinking when they made this movie. As a bad movie fan, my favorite kind of bad movie is the obscure, little-known b-movie that probably only got released onto video through some misdirected act of pity, and “Attack of the Jungle Women” delivers (At the time when this review was written, there were less than five votes for this movie, including mine.)

Initially, this movie tries to be an entertaining movie about a large company that wants to build a trans-continental highway in the Americas, but to do so have to go into the Panama rain forest and ask the natives if it’s all right with them to have a five-lane expressway put up over their ancestors’ burial grounds. For reasons that are beyond the Americans, the “ignorant natives” aren’t so keen on the idea of becoming a puppet to western culture and refuse.

Anyway, stuff happens, people die, and the Air Force is sent in to clean up the mess. In the end, it reveals itself as a propaganda film, showing off the spleandor of the US Air Force. Something here tells me that the filmmakers got some funding from Uncle Sam in order to make this movie.

In short, if you’re looking for genuine 1950’s bad cinema, this is it. This is one of those films that really makes you question how golden the Golden Era really was.