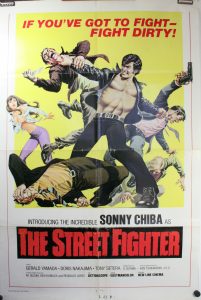 Remember during the height of the martial arts movie boom (roughly 1973-1976) the reputation that chopsocky films had for being replete with misery, violence, gore and degradation of the human spirit? Well, most films in the genre didn’t live up to the hype at all. THE STREETFIGHTER, however, set the standard for onscreen insanity, was originally rated X for violence, and has yet to be equalled (well…maybe THE STORY OF RIKI) for sheer, nasty entertainment value.

Sonny Chiba stars as Terry Tsurugi, an utterly amoral b**tard who is absolutely the last guy you would ever want to face in combat. Bruce Lee’s characters had the common decency to simply kill you and move on, whereas Tsurugi would make his punishment of an opponent extremely personal, down to the point of tearing off pieces of their bodies. His fighting style is graceless but effective, and a lot easier for any of us who strove to match the grace of Bruce to appreciate. If you want to see ass-whuppin’ administered with balletic grace and artistry, do not see this film. If you want to see a guy mercilessly whip truckloads of ass, then this is the movie for you!

In a nutshell: Terry tsurugi is a badass-for-hire who will take on any job if his price is met. Plotline #1 has Terry rescuing convicted karate murderer Junjo from his date with the hangman. When Terry relocates Junjo to Hong Kong so the Japanese police won’t find him, Junjo’s brother and sister show up and tell Terry that they can’t afford to pay him the rest of the money they owe for their brother’s escape. Tragedy results that will make Junjo Terry’s bitterest enemy and will eventually see them in a final showdown where only one will survive.Plotline #2 sees Terry volunteering to bodyguard the heiress to an oil fortune who is being pressured by the Yakuza. Her uncle happens to be a Karate master who is the only man alive that Tsurugi respects, and by working for him, Terry makes an attempt at redeeming himself as a human being (well, sort of…). Terry tries to stay one step ahead of the Yakuza, and his efforts culminate in a literal bloodbath where he takes on about thirty goons and puts much foot to ass.

The two plotlines overlap wildly and the ass-whuppin’ set-pieces are loads of violent fun. Chiba’s intense performance is unlike any other character in the history of the genre. Mean, violent and downright reprehensible, THE STREETFIGHTER is a unique milestone in the martial arts movie genre.