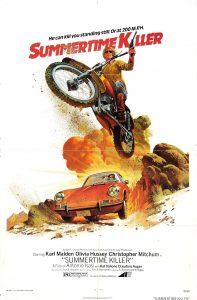 This vendetta story contains suspense , noisy action-packed , gun-play , motorbike racing and lots of violence . Acceptable Actioner deals about a six-year-old boy witnesses gangsters beating and drowning his daddy to death . Twenty years later , we follow the now-grown young called Ray Castor (Chris Mitchum) begins to chase and eliminate the mobsters who did it , determined to wipe out the entire band of hoods . As he systematically pursues and kills these gangs of hoodlums in N.Y. , Rome, and Lisboa . A police inspector named John Kiley (Karl Malden) investigating the murders , and a Mafia chief hires him to privately track down the murderer . A boss named Lazaro Alfredi (Raf Vallone) who heads the band , are just as determined to stop him . Meanwhile , Ray kidnaps his daughter Tania (Olivia Hussey) and things don’t always go the way you expect .

Stirring film in which there are nail-biting action scenes , drama , intrigue , explosion , suspenseful set pieces and big stars , if not much continuity . Chris Mitchum with his usual stoic acting -similarly his father Robert- , displays amount of weapons arsenal and fists killing nasties . Agreeable all action seventies Euro-nostalgia trip , being fast paced and rightly developed . An action filled European vengeance flick in which the avenger protagonist falls in love for his hostage and there are some thrilling motorcycle pursuits along the way before the final takes a slight twist . Successful crime thriller that follows the Vigilante genre in Charles Bronson/Death Wish style . It’s certainly thrilling and exciting , though the morality may be questionable , even in this time, as the spectators were clearly on the Chris Mitchum’s side . Mid-seventies Lisboa-Madrid come across as very European locations and serve as an excellent backdrop for most of the action . The plot was a satisfying mix of set pieces and unexpected plot twists . A fun and romantic snapshot in time and place in which a kidnapper falls in love with his victim . Varied cast formed by great stars such as Karl Malden , Olivia Hussey , Raf Vallone , Claudine Auger as well as Spanish secondaries such as Jose Nieto , Gustavo Re , Gerard Tichy , Ricardo Valle , among others . Even by today’s standards, it would be good, provided someone cared to restore it’s brightly colour , perfect editing, and natural sound . Atmospheric musical score by Sergio Barditti , even referenced in ¨Kill Bill. Volume 2 (2004)¨ , as score song “Summertime Killer” is taken from this film, heard when The Bride first enters Bill’s hacienda. .

The director was defending his name and career , but also his money in more ways than one , as he was one of the producers investing in the project . Antonio Isasi Isasmendi is a good professional , a craftsman who has directed several films in diverse genres , as adventures and action ,especially , such as The dog 1979 , 1968 Las Vegas, 500 millions , 1965 Estambul 65 and 1963 The mask of Scaramouche .”Summertime Killer” results to be a surprisingly solid little film , including some action scenes very skillfully staged Good revenge thriller is worth trying . This is a movie thats both entertaining and enlightening . Certainly worth watching if you’re in the mood for something other than typical exploitation fare.