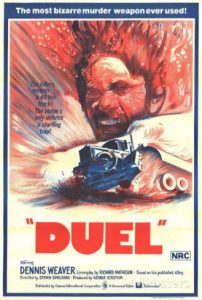 “Duel” is a 1971 made-for-TV movie directed by a 24-year-old that was filmed in less than two weeks and ended up costing less than $350,000 to make. When I tell people about the plot of the film (a tanker truck chasing a hapless driver, trying to kill him), they roll their eyes. On the surface, everything about “Duel” seems to cry out, “Cheesy!”

The fact is, though, that “Duel” is the exact opposite. It is a film of powerful suspense and its strength lies in its simplicity. The plot of “Duel” is something that anybody who has ever driven a car can relate to, namely that we’ve all had experiences with drivers who think they own the road. Many of us have also had experiences with drivers who seem to “stalk” us, who somehow get so mad that they repeatedly cut us off or repeatedly honk at us.

“Duel” just takes that common experience and takes it one step further: what if one of those crazy drivers was crazy enough to try to kill you?

This is Steven Spielberg’s first film and it’s quite obvious why this film launched his career. Spielberg himself often describes the film as something of a precursor to “Jaws,” as he feels that both films are about “these leviathans targeting every man.” Indeed, that overwhelming feeling of an unstoppable beast is present in both films, but “Duel” has one advantage here that “Jaws” does not. The villain in “Jaws” is a shark who, while unstoppable, is also avoidable. If you don’t want to get eaten, don’t go in the water.

In “Duel,” though, the truck can’t be avoided. If you run, it follows you. If you hide, it finds you. If you stop, it waits for you. You can’t run from it and you can’t stop it. Our protagonist is out in the middle of nowhere and so there is seemingly no place where this truck can’t go. As I watched “Duel,” it evoked something of a nightmarish feeling, the common nightmare of being chased and not being able to outrun the adversary. It is because “Duel” evokes such feelings and because it draws its plot from a common experience that the film doesn’t require a great deal of suspension of disbelief, which is what helps the suspense hit right at one’s core.

You may have noticed here that I keep referring to the truck and not its driver. That is because, while we know in the back of our minds that the unseen driver is the one who is crazy, “Duel” portrays the villain as the truck itself. This works so much better than having the driver as the villain. The truck is huge and heavy. It is dirty and scarred, like a battle-hardened beast. It also has its own mindless roar: the honking of its air horn. Again, simplicity works to the film’s advantage.

What is most memorable for me about “Duel” is its ending. I won’t even hint at how the movie ends, except to say that it includes one sound effect that adds a Spielberg-esquire touch to it.