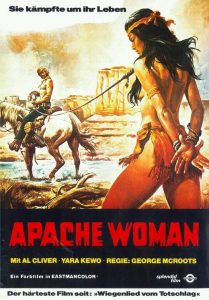 This Ravioli Western contains noisy action , shootouts , ravage , fighting , a love story , lots of blood and guts and a big deal of gratuitous violence . It deals with Tommy (Al Cliver), an innocent cavalry soldier and an Indian survive an attack , both of whom will have to pay a dear price for love and will find a lots of dangers . The Indians then seek revenge on the Blue soldiers accused of the attack , killing eye for an eye . In the meantime , Tommy falls in love for the beautiful Apache woman (Yara Kewa who spends 90 percent of the film partially naked) after rescuing her from an ominous gun smuggler and general supplies deliverer named Honest Jeremy (Corrado Olmi) ; but , a bit later on , gruesome violence ensues . As when Keith (Federico Boido or Rick Boyd) and his contemptible gang find Tommy , they kidnap The Apache Woman and rape her , but she puts up a brave fight against superior numbers . After that , another prospector captures and ties her ; then , she is subsequently freed . Along the way , many chases and fights ensue and the events gets worse . As the duo protagonists are drawn to a community of white people who are all racists , bigots , sleazebags, murderers and cutthroats .

This is an exciting story with tragic results about two survivors of a cavalry attack that make their way back to an army outpost ; packing some good action , nasty characters , exploitation , rampage , nudism , but lots of dull spots . Gratuitously violent late Spaghetti-era Old Western hits hard on racial themes . This ¨Apache woman¨ has an anti-military message and dealing with hardship on racial themes by that time , as well as excessive brutality . As the main cast , Al Cliver and Clara Hopf or Yara Kewa are attacked and will have to face off deal of risks and taking on a cutthroat weapons smuggler , prospectors , revengeful Indians and a heinous family headed by a villainous preacher until a final massacre . The confrontation amongst the cavalry and the hapless Indians is thrilling and extremely violent . As the movie’s central theme is the racism that ¨Apache woman¨ is subjected by a band of despicable people . ¨Una Donna Chiamata Apache” or “Apache Woman” results to be a rip-off on ¨Blue Soldier¨ by Ralph Nelson with Peter Strauss and Candice Bergen , this film was based on real deeds regarding ¨Sand Creek massacre¨ and with remembrance about Vietnam killings . Other films about this peculiar sub-genre about relationship between Indian-white man harassed by several enemies are the followings : ¨Scalps¨ (1987) by Bruno Mattei with Mapi Galán , Vassili Karis , Charlie Bravo , ¨Apache Kid¨ (1987) by Claudio Fragasso with Sebastian Harrison , Albert Farley , Lola Forner and ¨Cry for Me, Billy¨ (1972) by William A Graham with Cliff Potts , Maria Potts and Harry Dean Stanton . The highlights of the movie are , of course , the violent attacks , they result to be strong butcheries , real slaughters , including rape and gory scenes . The climax is really bleak and pessimistic . The tragic love between soldier and his Indian squaw is portrayed with little believability and delicacy . This so-so motion picture is classified ¨R¨ for the cruel murders and isn’t apt for little boys , neither squeamish . It displays acceptable action sequences in low budget with rousing attacks , poor scenarios and spectacular struggles .

Emotive musical score in Country style , including guitar sounds and catching song played by Judy Hill . This knock-off picture was regularly directed by Giorgio Mariuzzo , though he develops an extreme exploitation violence . Mariuzzo is an usual writer in several movies as “Fulci’s The House by the Cemetery” , ¨The Beyond¨, “Contraband” , ¨Decameroticus¨ and directing three films only : ¨Orazi e Curiazi¨ , “Beautiful Like Us” and this ¨Apache woman¨ . This is ‘a must see’ for action-starved Indian Western buffs with strong graphic violence who will enjoy the action and hard themes , though being very mediocre .