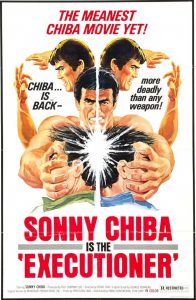 EXECUTIONER (1974) is a contemporary crime thriller about a secret band of fighters recruited by a disgraced narcotics detective seeking to stop the flow of drugs into Japan. While diehard fans of the film’s star, Sonny Chiba, are partial to this film, it may not satisfy those looking for the kind of martial arts thrills provided by the kung fu films that were coming out of Hong Kong at the same time. Chiba had considerable style and exceptional fighting skills but he rarely found a vehicle that knew how to exploit his talents properly. (My own favorite is his 1975 historical drama about post-war Japan, THE KILLING MACHINE.) Here he plays a man trained by his grandfather since childhood in ninja fighting arts but who has had little success finding his place in the world until he’s recruited, with the promise of great wealth, to help fight the Japanese mafia. In fighting mode, Chiba gesticulates wildly and displays the intense faces that became his trademark feature in the STREET FIGHTER series of films (1974), but which seem out of place here given the more secretive, subtle nature of the ninja arts. He does use some ninja techniques on occasion, most notably sticking to the ceiling to avoid being spotted.

Chiba has a few good fight scenes, in some of which he takes on multiple opponents. In the big climactic finale, he faces a group of formidable opponents, including a pair of Caucasian wrestlers. However, there are long, silly patches in between as Chiba banters with his teammate, Sakura (Ryo Ikebe), a sex-crazed escaped con who’s supposed to be a fighter also but never quite carries his share of the action. Providing a serious anchor to the proceedings is the venerable character actor Makoto Sato (also seen in MESSAGE FROM SPACE), who plays the former narcotics cop seeking to redeem himself. The film is violent and bloody, but not as over-the-top as the STREET FIGHTER films. There is also plenty of gratuitous, if not terribly attractive, female nudity (mostly involving non-Asian women).

Japanese samurai films were often distinguished by elegant camerawork and stately, formal compositions. The swordfights were photographed full-frame with all of the action contained in the widescreen image as the camera operator simply followed the actors as they fought, without a lot of intercutting or cutaways. The people who made those films, however, did not work on Chiba’s films, which were often undermined by excessive handheld camerawork and awkward compositions. This film may not be the worst offender (that would be CHAMPION OF DEATH, 1975), but the camera is still generally either too far away or too close to the action. It sometimes moves around within a scene for no reason and too often settles on a composition cluttered with unnecessary objects in the foreground. The loud, jazzy, 1970s score is much too intrusive as well.

The big problem with Chiba’s films, for many fans, is that there simply weren’t enough fight scenes and when they did occur, no matter how well staged they were, they were badly photographed. His films are not as focused as comparable Hong Kong films of the era. One need only look at THE CHINATOWN KID (1977), starring Alexander Fu Sheng, for a model of how a contemporary crime drama could use martial arts effectively without disappointing the audience or wasting the skills of the performers. One wishes Chiba had gone to Hong Kong to make kung fu films with such master directors as Chang Cheh (THE CHINATOWN KID) and Lau Kar Leung (SHAOLIN CHALLENGES NINJA). The HK filmmakers knew how to showcase their performers (Gordon Liu, Alexander Fu Sheng, Chen Kuan Tai, the Five Venoms, etc.) and provide numerous, intricately staged fight scenes that allowed the fighters to show their stuff. Interestingly, one of Chiba’s co-stars in EXECUTIONER is Yasuaki Kurata, who is better known for the numerous HK kung fu films he made (over a period of 25 years), including THE ANGRY GUEST, SHAOLIN CHALLENGES NINJA, LEGEND OF A FIGHTER, NINJA IN THE DEADLY TRAP and FIST OF LEGEND (where he squares off with Jet Li). Sadly, Kurata has only one brief fight scene in this film. No wonder he worked so often in Hong Kong. (Chiba later did turn up in HK films, most notably the 1998 fantasy adventure, THE STORM RIDERS, which relied more on computer effects than on genuine martial arts skills.)

All that said, however, EXECUTIONER is an eminently watchable action film and is, of course, a must for Chiba’s fans. The 83-minute print seen on the Crash Cinema DVD release in the U.S. is quite scratchy and choppy in places, but the letter-boxed image is otherwise sharp and beautifully transferred.