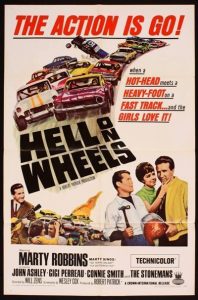 Here’s a “no-budget” independent production designed to showcase both the singing and racing skills of good ol’ boy country crooner Marty Robbins. He’s obviously a talented singer, and apparently a passable race car driver. But he should never have attempted acting, as evidenced here. He has absolutely no charisma, nor the good looks to let the viewer forgive him his stilted screen presence. Robbins could be reading off cue cards, judging by his performance in “Hell On Wheels.” Fans of his music can enjoy the four songs he performs, even though the staging is dull as dishwater.

Then we have the strange casting of hunky John Ashley as Marty’s brother. They look like they came from different planets altogether. And Ashley’s character is written in such a way to make him a spoiled and petulant brat, constantly jealous of his more successful brother. Add to that a nagging and self-pitying mother who would drive the most devoted son to move to a different state, and Ashley’s clueless wife, who lavishes attention on Marty instead of her handsome husband.

And they throw in an nearly almost completely unrelated subplot about another brother who works for the A.T.F. Department. This noxious sequence only exists to show how a backwoods moonshine still can be “blown up REAL good!” They even do it twice for good measure.

What entertainment value can be gleaned from this grade-Z effort can be found in two ways. The first being the Cinéma vérité scenes of early Nascar racing and its “salt-of-the-earth” fans. There are extended scenes of these simple folk filing into the stands and watching the races with great interest. It’s a Tennessee fashion show!

The second element of enjoyment can be found in the music interludes by the one of the guest stars, The Stonemans, who were a family bluegrass group. The female guitar player kicks up her heels and dances in such an exuberant manner, that it’s a riot. And her gold go-go boots are something! Connie Smith also sings two songs that are passable, but exceedingly dull in the staging. She deserved better.

But, by all means, PLEASE stick around for the closing musical number where Marty croons a song about butterflies to his nine-year-old niece. The reaction shots of the little girl reach a fever pitch as she soon pokes her right index finger well up her nose! And it’s a medium shot with only her in the frame! Now there’s Cinéma vérité for sure!