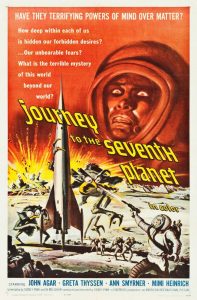 The movie’s setting is 2001, when according to the opening monologue, “the planet earth is no longer racked by wars and threats of annihilation. Man has learned to live with himself.” Really? A bit optimistic there! Anyway, the United Nations, the world’s governing body (Yikes!), has undertaken missions to determine if life exists on the planets of the solar system. So far there has been no luck. The current rocket mission is to explore the surface of planet Uranus (pronounced as Ur-ah-nus), which has a cloud-top temperature of 200° Centigrade. After all, it’s almost 1.8 billion miles from the sun! It emits a “strange radiation” and is not very dense, being composed of ammonia and methane. These facts do not faze the five men in a rocket ship who seem to land in a forest (actually an icy surface). It is obvious that little or no pre-landing preparation was accomplished, for there were no orbiting satellites, no unmanned probe, and no specific information gathering. Ah, details, details . . .

After boring dialogue that consumes nearly one-half of the picture, the explorers finally depart their spacecraft with their rubber suits and headgear. They find weird happenings, like green plants that do not belong there; they lack root systems. Houses and windmills automatically appear when the spacemen think about them. It seems that the planet is using mind control to dominate the spacemen. The memories of the men are used to format illusions instead of the realities of the planet. They include the Danish pastries, er, alluring earth women who do not really exist on Ur-ah-nus. When Captain Graham (John Agar) is rescued after sinking in a quicksand-like substance (ammonia snow particles), he says rather haltingly, “I . . . am . . . glad . . . you were here . . . to pull me out.” “Be careful,” the boss wisely utters. The men do encounter a one-eyed Allosaurus – they think it’s a rodent. It seems that one of the crew has a fear of rats. “That’s it,” utters the commander, “Our deepest and greatest fears are being dug up by our subconscious by whatever the power is out there and pitted against us!” The novice astronaut chimes in that it is not only the fears that are used but also the desires (cute chicks) as part of mind control. Oh, the tension! What to do?

Before long the space heroes are smooching on the Danish pastries (Ingrid, Greta, Ann, Mimi). But time is running out for them to blast off from their optimum orbital position. If they miss it there will not be enough fuel to return to earth. Oh, the horror! Then they encounter other oddities, like the giant tarantula. They soon (not soon enough) encounter the telepathic Big Eye-on-Brain, which is exposed without any covering! Big Eye’s sinister plan is to conquer the earth (HA HA HA HA HA). “You will submit, and I shall possess you.” Oh, the pressure! Can they stop this maniacal alien? The ludicrous ending will not be revealed here. Darn!

Directed and produced by the incomparable Sid Pink, who gave us “The Angry Red Planet” (1959) and “Reptilicus” (1961), this Danish honey was made on the cheap ($75,000). Filming could not have taken more than a few weeks. It shows: wretched dubbing, laughable dialogue, wooden acting, cheap sets, and meager production values. The film was sent to American International, who reportedly made several special effects changes before the American distribution to theaters. So aging is not an issue with this stinker, as it was awful at the very beginning! Hard to believe it was even worse than it is! John Agar, that creature from Earth, made such films as “Tarantula” (1955), “The Brain from Planet Arous” (1957), and “Attack of the Puppet People” (1958). Surprisingly he is only the second-in-command here. The other actors are better left unnamed.