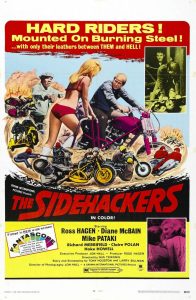 SIDEHACKERS (AKA: FIVE THE HARD WAY) was a break from their usual sci-fi/ horror fodder. But it’s no less bizarre. In the late 60s, biker movies were all the rage. Also in the late 60s, and continuing into the late 70s, there was a sub-genre called “Rough Justice”. In these films, the anti-hero, a solitary character, was wronged by a group of ruffians. And so, the anti-hero would hunt down said ruffians and kill them in some morally questionable ways. For instance, think of: DEATH WISH, THE HILLS HAVE EYES, LAST HOUSE ON THE LEFT, and I SPIT ON YOUR GRAVE. Just to name a few. In SIDEHACKERS, stuntman-turned-actor Ross Hagen plays Rommel, a biker who competes in sidehacking. Basically, a race involving two people on one bike. He’s engaged to Rita. And their love is pure and free, as evidenced by the syrupy sweet music. But wouldn’t ya know, Rommel gets on the wrong side of JC (Michael Pataki, in his most psychotic role). He winds up getting badly beaten. But Rita is killed. Now, Rommel wants vengeance. He calls on several lowlifes to help carry out his revenge. Acting is, on the whole, good. Hagen, though, isn’t much of an actor. There are some truly excruciating moments, like the dumb hick’s rendition of the old “some can tell a joke, and some can’t” joke. And the ending is a bleak cop out. My main complaint is with the misleading titles. Where’s all the bike racing that the title “Sidehackers” would suggest?