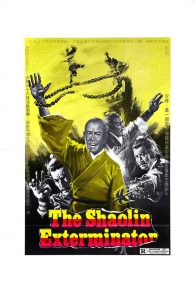 Something strange goes on at Dragon Town. It starts with a girl killing a traveler trying to cross a bridge. She uses a nonsense weapon called a needle gun. A few more men are killed and everyone speaks of ghosts. Enter Pai Ying and a monk. Pai Ying is proud to say he is looking for ghosts, specifically naked female ghosts. What happens next is confusing for two reasons. The action abruptly switches between Pai Ying and the other lead Wong Goon-Hung. Also there are two girls and from the poor resolution (VHS quality) and that they all wear all white costumes one can’t tell them apart. Eventually Wong Goon-Hung and his girl find a tunnel. If you manage to hang in there for about an hour you will get your explanation or spoiler – whatever you want to call it. The ghost business is just to scare people away from a tunnel some rebels dug to get to the emperor and kill him. The alternate titles in involving 36 Shaolin beads concern the beads that Pai Ying wears. They are magnetic and make the anti-weapon against the girl’s needle gun. Overall I can’t rate the movie any higher than average for the year and genre. The fights were the same old thing over and over again and most seemed to happen in the dark and were hard to see.