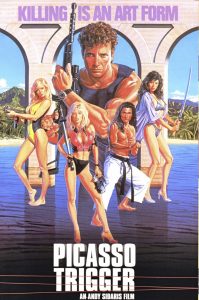 Picasso Trigger, the third film in Andy Sidaris’s Malibu Express series, is par for the course in terms of nudity and violence, with the obligatory big breasted babes disrobing at regular intervals to get fruity with the musclebound hunks, and lots of baddies being shot, blown up, or impaled. Luckily, this one proves to be slightly more entertaining than the last entry (Hard Ticket to Hawaii) thanks to Sidaris adopting a more deliberate Bond-style approach, one that comes complete with an international villain and silly gadgets (designed by ‘Q’-alike boffin, The Professor) to go with the usual array of chase scenes, explosions and exotic locations.

The plot (yes, there is a plot!) sees government agents Travis Abilene (Steve Bond), Jade (Harold Diamond), Donna (Dona Spier), Taryn (Hope Marie Carlton) and Edy (Cynthia Brimhall) joined by Paris operative Pantera (Roberta Vasquez) to bring to justice the gang who have been bumping off their colleagues. However, everything is not as it first seems, with Travis and Co. eventually discovering that they have been set up by bad guy Salazar AKA Picasso Trigger (John Aprea) to help him eliminate his competition.

Picasso Trigger is no means a great film—Sidaris’s direction still leaves a lot to be desired, the action scenes being far less thrilling than they are unintentionally amusing—but with plenty of sexy Playboy-standard babes getting naked, crap martial arts, a pointless sub-plot about snuff movies, crazy gimmicks such as an exploding boomerang (which would surely come back and blow YOU up?!?) and a rocket-launching crutch (programmed by pocket calculator), blatant product placement (even the local Hovercraft Hire company gets in on the action), and VERY LARGE CAPTIONS to let us know what day of the week it is, this is worth a go when you don’t want to have to think very hard.