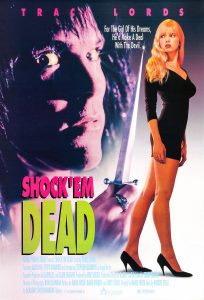 Rehearsing with a band, Angel Martin, (Stephen Quadros) is quickly booted out by the other members, Greg Austin, (Tim Moffett) Izzy, (David Homb) Dustin Clean, (Christopher Maleki) and Jonny Kraft, (Markus Grupa) when he turns them off with his playing despite objects of Lindsay Roberts, (Traci Lords) the band’s manager. When his personal life becomes no better, he seeks help from a local voodoo woman, (Tyger Sodipe) who is able to give him extraordinary powers to help him fulfill his dream, and he soon becomes a guitar god like how he wanted. Rejoining the band with the new abilities, he is soon able to make them even more popular, but as soon as that happens, she returns to tell him the price that must be paid for what he bargained for. When he comes to grips with that, he has far more troubles ahead for him and the band, when they learn what he has done.

The Good News: There wasn’t a whole lot to this one, but it did have a couple good parts. One of the few things that worked for this one was the rather cheesy and entirely 80s ideal of putting in far more cheese than there should’ve been. The general idea that the film presents is something that works well for the cheese, as the idea of what happens is something that the film works well with. There’s plenty of it from the mixing of metal and horror, with the band and all their dealings and their rampage at the end both come off as something to be admired. The different attacks in here are actually really well-done, making the most use of different kinds of settings and various tactics to use some really fun times. The one at the pizza parlor is one of the best ones, and a parking lot attack is quite creepy when the green eyes show up in the turn-over. There’s also the really fun scenes with the transformation, showing all the cheesy different moments, from the devil images to the fact that the changes are brought about through a cheesy manner are all located in here. It even has a lot more nudity than expected, offering up something for the fans of that to have some fun with it. These here are what really make the film enjoyable and worthwhile.

The Bad News: This one here has a couple of flaws in it. One of the biggest ones is that the beginning of it is so dull and boring that it gets to drag on to the point of aggravation. Featuring all the different torments in his life isn’t really needed for the film, it goes on just fine without needing to have it included. All the work at the pizza parlor, except for the nudity, is completely useless as the scenes enforce what is already known, dropped after the beginning when he transforms into the musician and do nothing but expand the film out, and as it’s not needed at all in the film, the very fact of needing it is something that doesn’t work at all. There’s also the really large amount of time that it spends getting him acclimated to the change-over is yet another example, which is there for nothing and just simply takes up time, as well as the party that is thrown. The amount of cheese on display is something to get over, which is something in here which has such high levels manages to actually do more harm than good. The very idea of the geek-transforming-into-bad-boy is one aspect of the story that really gets exploited in here, and it forces the film into a large sequence of scenes that may eventually get too tiresome for some. The revelation of what awaits him following the transformation is one to take into consideration, as well as the fact that such a high portion of the film is dedicated to extreme metal music is something as well, which is something that not all out there are going to be interested in. With these flaws, the film drops down from the positive points.